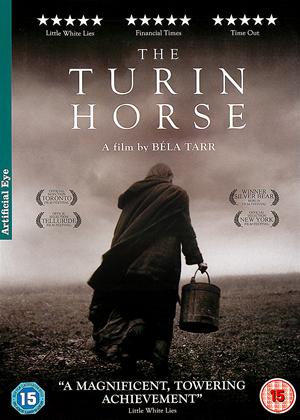 Reviews (4) of The Turin Horse

In 1889, Freidrich Nietzsche witnessed (and protested against) a man flogging his horse, and then went mad... This film supposes what happened to the horse. The man continues to abuse him, but we grow to see that the whole life of this poor rural farmer is a kind of abuse. This film is the final distillation of Tarr's unique vision. It is made of thirty, slow, b&w tracking shots, often of banal incidents. There is little dialogue. The audio is filled with repetitive sounds (and no music). It is meticulously crafted (Tarr interviewed hundreds of horses from all over Europe to find his star) and weirdly beautiful.

It's difficult to say what all this means... Tarr seems to be finding and describing the unexpected weight of life. It is an extreme experience. On completing this film, Tarr retired, believing he had nothing left for us.

The Relentlessness of Existence - The Turin Horse review by Cato

This is a long film, 155 minutes to be exact. There is no let up from the relentless grimness of two people's lives on their down at heel farm. The weather mirrors their gruesome existence, combining with a score of tragic descendant music that further adds to the monochrome reflection of the inexorable fate of their lives. The only positive behaviour that is shown is from the poor man's daughter; -her actions and speech show some optimism and the viewer will feel a great sympathy for her.

A long watch, but I must say that the poor horse acts her part very well.

Taking as its starting point the mistreated horse that supposedly sent the philosopher Nietzsche into mental imbalance this uncompromising vision of a film follows the daily routines of life of an isolated farming family comprised of a disabled father and his daughter. We presume that the encounter with Nietszche -- which is never directly referred to -- has somehow brought a species of curse onto these vulnerable but resilient characters who live their subsistence-level lives in the teeth of a relentless steppe wind. As the film unfolds, the 'curse' steadily makes its presence felt -- some aggressive travellers show up, the well runs dry. Tarr's vision politicizes Nietzsche's famous declaration that 'god is dead', and the philosopher's ideas are briefly articulated by a neighbour who visits to buy moonshine, attacking a system that seems relentlessly bent on the destruction of the rural poor. I felt I had to undergo this film, not just watch it -- I'm still thinking through and living its indelible images.

This may be an 'Art Movie' but I found the snails pace and the awful endless noise of wind, the sadness of the man, the woman and their horse was too grim to bear. My hope for something to raise the viewers spirit was dashed. Some black and white camera shots were beautiful

When a movie that begins with a voice over narration describing the moment at which philosopher Fredrich Nietzsche witnessed a man whipping his horse and in an attempt to protect the horse threw his arms around the animals neck, suddenly Nietzsche was taken ill and collapsed to the ground, later he was diagnosed with a mental illness that left him physically and vocally paralyzed until his death 11 years later, you’re don’t really expect what follows to be a barrel of laughs. Particularly if you’ve seen any of the directors previous movies.

Bela Tarr’s movies are known for their length, seriousness, depressing nature and overall hard-going-ness. This alone is enough to put a lot of people off, add the death of a loyal farm horse to the narrative mix and you’re left with about two willing audience members.

In total honesty I would not be one of those willing viewers, however I am a professional and moreover was being paid to watch the movie, and despite the long and painful journey that I was taken on for the next two hours I am glad I stuck around.

To say I got pleasure out of the movie would be somewhat inaccurate, as the heartbreaking tale of a farmer and his daughter who realise their faithful cart horse will soon die and will no longer be able to provide them with their livelihood is not exactly enjoyable subject matter yet the film presents its almost apocalyptic plot with a surprising air of grace.

We watch as for six days the horse grows weaker and the two inhabitants of the impoverished farm house in the middle of God-forsaken valley toil their way toward the grave, dining on a single boiled potato and taking turns to stare out into the empty space beyond their window; and it pains us. When a neighbour visits, only to declare that the end is coming, we feel desperately dehydrated, as though all the joy and light of our souls has been sucked away, and then as the voce over, Tarr himself I suspect, announces in a twist of the hope-filled Edison quotation “Let there be dark” we feel a rather sorrowful release; like that of going to bed after a long, exhausting but wonderful day.

Supposedly Tarr’s final movie, the Turin Horse would be spoilt by any follow up. It’s long, painful and heartbreaking runtime is like a labour that ends in a stillbirth, dark and unrecoverable but some how evocative of the magic of life and existence.

Not for the faint hearted, the Turin Horse will leave you mentally ravaged but with a sense of insight you did not have when you entered the theatre.