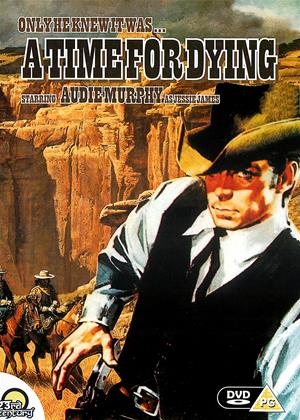 Synopsis:
In the dark days of the American West, in towns ruled by thieves, outlaws and gunfighters, one name remains, to this day high above the rest, Jessie James...A name which brought fear into the very heart of most men. Jessie was re-known for his fast thinking and fast drawing. Many a fine man had reached Boot Hill via Jessie James's guns. But as always the other men fought for the privilege of the dubious credit of the downfall of such a man. K.C. And Billy Dimple were two such men. Both wanted to...needed to...Prove that they were equal to any man's speed. Silver City was to bring these men together. The Boss, the Challenger and the Amateur. Was there room enough for all these men...
And a beautiful girl...Or would it be 'a time for dying'
Actors:
Richard Lapp, Anne Randall, Robert Random, Beatrice Kay, Victor Jory, Audie Murphy, Ron Masak, Burt Mustin, Peter Brocco, Walter Reed, Louis Ojena, Ivan J. Rado, Walt La Rue, Maria Desti, Betty Rowland, Tina Stuart, Joanne Shields, Meri McDonald, Darla Paris, Arlette Thomas
Directors:
Budd Boetticher
Producers:
Audie Murphy
Writers:
Budd Boetticher
Studio:
23rd Century
Genres:
Action & Adventure, Classics

Reviews (1) of A Time for Dying

Another film ruined by the bargain bin DVD... - A Time for Dying review by Count Otto Black

Oh dear, oh dear, oh dear... Once again this rental company has demonstrated that when it comes to older movies, they just grab the first copy they see and don't give a hoot about its quality. Unless of course they deliberately buy the cheapest one. Either way, it's all about making money by renting you a DVD which can technically be said to have the film you wanted on it, and who cares if it's of such poor quality that having the cheek to rent it out shows utter contempt for both the paying customers and movies in general.

This DVD looks like, and quite possibly is, a tenth-generation copy of a VHS home video taped off the telly a very long time ago. You'd do better, or certainly no worse, to save yourself the price of a rental and watch it on youtube. If you think I'm making too much fuss because those screenshots above look perfectly OK, they're not taken from the film you actually get. They're not even in the same aspect ratio. I couldn't bring myself to sit through what might be a pretty good film because every frame is a washed-out degraded mess. And they don't even have the excuse that this is such an incredibly obscure movie that good copies are impossible to find. Budd Boetticher is considered to be one of the great western directors. It's true that this is one of his less famous movies, but even so, if they can't find a better copy than this, they aren't trying very hard. Shame on you, Cinema Paradiso!

Note to all customers: on the general info page, where it says "Studio", that's not actually the studio that made the film, or indeed a studio at all, but the company that manufactured the DVD. If you see certain names, don't rent the film, the worst offender by far being the truly execrable Elstree Hill, many of whose unwatchably hideous DVDs this company unfortunately possesses. 23rd Century seems to be another name which guarantees a grossly substandard viewing experience.