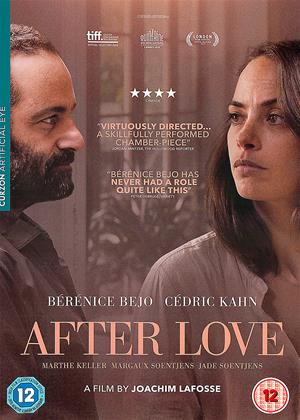 Reviews of After Love

After Love is directed by Joachim Lafosse and stars several international film stars that will fly over most Anglo-Saxon moviegoers’ heads, namely Bérénice Bejo as Marie Barrault (The Artist) and Cédric Kahn playing Boris Marker (probably more known for his writing than his acting career). And the film boils down to one of those all-too-familiar European family comedy/dramas that, while marginally faring better from their Northern American counterparts, carry little artistic weight when everything tallies up to a zero-sum game.

This is a fancy way of saying that the film is mediocre tops.

Director Joachim Lafosse has a special fixation to enclosed, claustrophobic spaces – as seen in his previous features Private Property, Private Lessons, Our Children and The White Knights; After Love is no different an exercise, but instead of two antagonistically different sides as in his previous pieces, here he chooses to introduce conflict between two passive-aggressive observers who end up more fond of each other than what they initially thought.

The husband and wife to-not-be-anymore want to file for divorce, but since their allowance doesn’t allow such excursions – they both end up living under the same roof, at least for the time being. The space beneath the roof is objectively decent, but for two blood sworn enemies leads to nothing but trouble of the highest disorder.

As different character traits clash, it becomes crystal clear how one of them makes the most out of it, while the other is on the verge of a nervous breakdown. After all, we’re all different, aren’t we?

After Boris upright refuses to leave, his reasons for staying start to gradually reveal through the screenplay as a vessel: he demands from Marie to pay off his fifty percent of the apartment’s share, which he loudly exclaims that he earned with decency and respect. And still, it seems Boris’ feelings for Marie gleam deeply beneath his unshaven, altogether dirty physique – a reason plus to stay indoors and bother his former wife and his beloved twin girls. Is it late for one to salvage a broken, 15 year old marriage?

Days go by, and Boris’ inability to decipher his own failures leads him to be the last person anyone wants to see at an indoors dinner table party. Perhaps this comes off as the most intriguing scene from the whole picture, as it almost feels like real people carrying on about stuff that took place in their real lives. It’s easy for one to be lost in such scenes – especially if you happen to have your own battleground upon which you cross swords against your partner in life.

Then, the finale fails to condense the impact After Love’s middle so carefully nurtured. I will not spoil it for you however.

Ultimately, After Love is a perfectly crafted film that stumbles right before exiting the door, as if following Boris’ advice on how to keep a marriage from falling apart altogether.