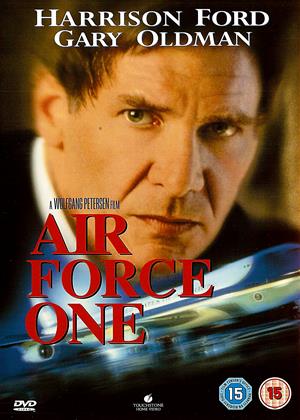 Reviews (1) of Air Force One

Too American for my taste - Air Force One review by RP

It's yet another 'assassinate the President' sort of film - and unless you're from the USA, you'll probably find it a bit over the top in its gung-ho style and patriotism.

I had recently seen 'In the Line of Fire' which is a pretty good example of this genre and also directed by Wolfgang Petersen and thought I'd view this one again. I'd seen it a few years ago and remembered it as OK, if a bit over the top.

It's got a shed-load of well known actors including Harrison Ford (the Pres), Glenn Close (the Vice Pres) and Gary Oldman (the chief baddy). Harrison Ford plays yet another of his 'humble man' roles, only this time he's not only the Pres, but also a highly decorated ex serviceman, so any baddy better watch out. And that's exactly what happens - Gary Oldman and other Russian baddies infiltrate themselves onto the President's plane and attack, and Harrison Ford fights back and (of course) saves everybody.

Well, there are a few casualties of course - but the biggest casualty is credibility. It really is unbelievable stuff - I don't think it's that easy to board Air Force One, automatic weapons fire spraying everywhere but no bullet holes in the fuselage, an escape pod for the Pres, parachutes for everyone else, special effects that nowadays look quite amateurish, relationships with Russia looking like something from a different era, etc etc.

Gary Oldman makes a good baddy but that's about it. I suppose if you close your eyes and let it wash over you, you could enjoy it, but frankly it's the over-the-top reverence for the Pres that got my goat.