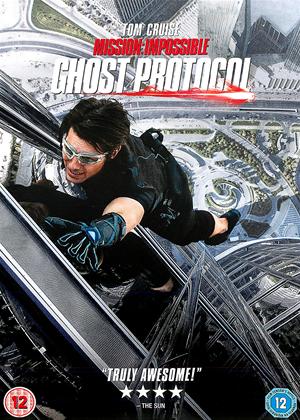 A fourth instalment in a patchy series comes out and makes itself the best. Ethan Hunt is back on the case, ready to take part in another mission, that involves nuclear weapons and Russians. What's most important here are the action sequences. Unlike the recent fad of shaky cam and confusing action, Paramount with Brad Bird to direct, only previously familiar with animation films. This is what makes him so successful, you wouldn't be doing shaky cam with animation. Instead, Bird cares about framing and being able to focus on every individual action. The scenes are clear and oh so memorable. Whether it's a humorous prison escape scene or a foot chase through a sandstorm. The best part being the climbing of the tallest building in the world. It really does rack up the tension, and continues to introduce plot complications that must be overcome by a crack team. Although still the point man, Cruise shares a lot of the great action with his co-stars. Peggis the obvious comic relief, but he isn't unimaginable as a field agent. Patton and Renner are both given emotional hooks to give them something to do and focus on between the action. I was also very happy that the film knows it's a fun spoofy spy movie at heart, so we do get outrageous gadgets, the kind that used to make Bond movies fun. Exciting, fun, with enough character moments for the downtime, this is a wonderful action movie that I highly recommend.

IMF (Impossible Mission Force) Agent Ethan Hunt (Tom Cruise) is incarcerated in a Russian prison, but no worries, his crack team of a tech whiz Benji Dunn (Simon Pegg) and field agent Jane Carter (Paula Patton), is on the ready to break him out. After this rescue, Ethan, Benji, and Jane, accept a mission that brings them to the Kremlin, to intercept the nuclear codes that could start a potentially destructive new war.

and now their mission – should they choose to accept it – is go rogue for the sake of the entire world. ‘Mission Impossible: Ghost Protocol’ directed by Brad Bird and produced by J.J. Abrams, does not miss a beat when it comes to stealthy espionage and thrilling action.

With Tom Cruise back in full form as Agent Ethan Hunt, you may even say that this addition to the franchise has revived it. The ‘Mission Impossible’ movies have always been about diversity. Since its first 1996 movie adaptation directed by Brian De Palma, the franchise has had three more new directors to navigate the action and intrigue of each (John Woo, J.J. Abrams, and now Brad Bird).

The treatment has never been the same, giving it and the audience a unique experiences and iconic images (Tom Cruise hanging on a wire, anyone?) With Brad Bird, whose credits include Pixar’s action-filled ‘The Incredibles’, he brings frenetic and non-stop action sequences and with J.J. Abrams as producer, an ‘Alias-like quality, what with our IMF agents globetrotting from one country to another. The result in ‘Mission Impossible: Ghost Protocol’ is boundless energy and even new blood in the casting of Jeremy Renner as an unlikely analyst-turned-agent with a deep, dark secret William Brandt (who has his own man-hanging-on-wire moment, a nod to Cruise’s original).

What this film lacks is ambiguity; Ethan Hunt and the rest of the IMF team are heroes. They’re the ‘good guys’ but good doesn’t necessarily mean they can’t be bad. And weapons of massive destruction again as the villains? Really?