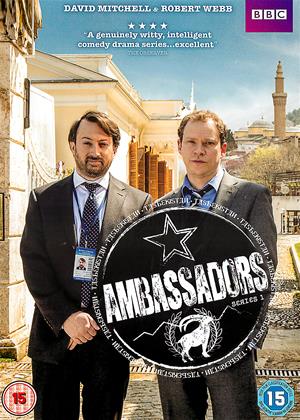 This is the funniest thing to come out of the BBC since the series '2012'. Set in the fictional (but true to life) corrupt central Asian state of Tazkbekistan, it follows the adventures, trials and travails of a the new Ambassador and his more experienced deputy.

It is short - 3 parts - but each part s a real classic, whether part one about The Mighty Ibex and the Helicopter Contract, or part 2 with Prince Mark's visit to get the Oil Contract (based on Prince Andrew, I hear, or part 3, about the Insurgency and the 'Paisley Visit'.

The British ambassador has to put up with a lot in this most junior of junior postings in the diplomatic service - a mad dictator, corrupt officials, Royal visits, constant nagging from London, a mad Northern Irish vetting official (brilliantly played) called 'Mr 21' after his obsession that officials should drink now more than 21 units of alcohol - a week (what, not a day???) - and worse, the French. Watching how the political, moral and personal aspects twist and turn and occasionally collide is hilarious - I bet the writers had a ball writing this!

Series 2 will shortly be broadcast in BBC 2, I hear - though why the idiotic BBC puts it on so late on that channel is anyone's guess.

Forget drivel like 'Miranda' or dreadful ethnic sketch shows. THIS is where the real comic writing talent at the BBC resides.

Rent this + laugh your head off at an intelligent, well-made, superbly-written drama. 5 stars with a bottle of Tazbekistan vodka thrown in!

I shall ask my old school friend - now British ambassador is a corrupt, chaotic, small eastern European state (which begins with M + is under Ukraine) - how true to life this is when I see him next too!

This is intelligent humour at its finest. The wit is (for me) not laugh out loud, but is pleasant and gentle. It is silly, clever, satirical and political. It relies a bit heavily on racism and xenophobia generalising on corruption and brutality in the Russian southern states, making it remarkably un-P.C.

Gloriously funny, intelligent and wonderful dead-pan acting. If only there were more like this.