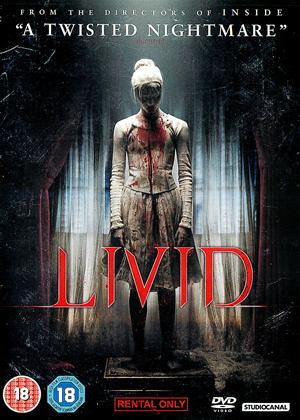 Catherine Wilson (Catherine Jacob) is a home care nurse and is introducing young Lucie (Chloé Coulloud) to the job. Visiting eccentric old Deborah Jessel, a dying millionaire (several times over) in a coma in her sprawling mansion, Catherine insists on going to tend to her alone, leaving Lucy in the car outside. And yet Lucie is naughty and decides to follow her anyway – she also breaks confidentiality rules and tells her boyfriend Will about Mrs Jessel and her fortune. Naturally, the two of them (together with Will’s brother Ben) decide to relieve the old lady of her riches one dark night …

There’s more than a hint of Del Torro in the way the house and its shadows are revealed to the trio as they explore it. The find the enclosed corpse of Jessel’s daughter (is she the legendry ‘treasure?’) and things get progressively more weird from there. As the two lads become increasingly frustrated about not being able to locate any riches, they start smashing the place up. This changes them from impudent rob-dogs into people we actively dislike. But if we think they are behaving badly, the ‘little old lady upstairs’ is about to incur evil on a different scale.

I hope there’s no point trying to make too much sense out of what happens in the remainder of the film, because I enjoyed simply basking in the uneasy atmosphere of every nightmarish set-piece that is relentlessly displayed, and abandoning any intricate story strands. It’s likely that you could pause the film at any time throughout and have a beautifully detailed horror image presented to you.

‘Livid’ is not reliant on CGI effects, but those that are used are restrained and extremely powerful. They add, rather than detract from, the film’s mesmeric quality. In all, ‘Livid’ combines wincing gore, violence and a true atmosphere of doom with some serene, haunting, even beautiful imagery: it is the darkest fairy-tale complete with reanimated animal heads, china dolls, tea-parties and the most haunted of houses. As it ends, you are greatly moved, and yet unable to pinpoint exactly why (although the wistful performances have a large part to play). A wonderful film.