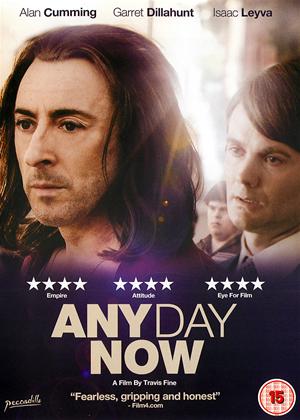 story worth watching - Any Day Now review by gazmb

What a very well made film , great story and great acting from everyone in it. A story of a gay couple who try to adopt a young guy with a disability and have to take thier case to court. Very good story worth watching.

Great film, such a sad ending, bigotry won im afraid, when you could see what the right out come should have been

The start of a new relationship should to some extent be easier than the relationship itself, or thats what movies seem to believe, especially when it comes to romance films. Finding love for a gay man in 1970s California on the other hand, thats damn near impossible apparently.

It’s a fresh idea for a story and director Travis Fine understands this so don’t expect a conventional ending here, it’s a film set squarely in reality, it holds no punches and it often surprises but it also finds great joy in little moments such as a bedtime story, a first kiss and the simple pleasure of sitting down for a meal together.

Thats not to say everything about the film works, its an incredibly sanctimonious film that struggles through its condescending first act. While the film tries to make Rudy and Paul’s first encounters somewhat magical but when you have to sit through stagey dialogue about changing the world and the importance of the little guy its hard to enjoy what is supposed to be a simple love story.

The film finds its rhythm about halfway through when Marco becomes a bigger part of this duo’s lives and they start to become what can only be described as a family. It’s a moving feature with two wonderful performances at the heart of it with Dillahunt being absolutely breathtaking as a closeted, self conscious gay man.

Ultimately Any Day Now is powerful stuff worth a watch but don’t expect anything mind changing, it’s a story about life plain and simple and while the film isn’t perfect or award worthy it is content with the story it tells and watching the coming together of these three people to make as good a family as anyone else, if only the rest of the world they encounter would see that.