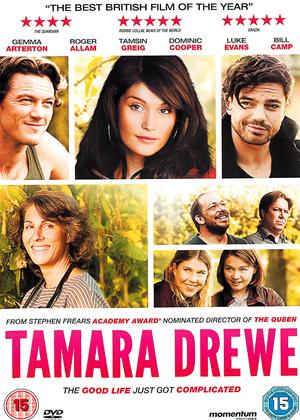 I'd give this three and a half stars. Not quite four. Why? Because it's simply not that funny. There are SOME great scenes and gags, but not enough - and some of it is just plain farce - and unfunny farce at that. The characters are cariacatures and steroetypes too. However, I did LOVE the American author who struggles to write a word on the author's retreat! But I simply didn't believe that the main character could go from ugly duckling to admired beauty so easily - that kind of thing works on the page, in Hardy's original novel (Far From The Madding Crowd on which this is based), but not on the screen. Also, I had a problem with the wronged wife character - the writer and director clearly thinks the audience would sympathise with her or feel pity; all I felt was irritation and annoyance at how the woman was so pathetic and weepy and hysterical! Perhaps because the cartoon script in the Guardian that this is based on was written by a feminist? Maybe that's why. Anyway, this is worth a watch - and is funny in parts. One of the better comedies of the last year.

The film is boring and fails to catch one's attention. I could not even get to end of the movie. It is monotonous

A considerable disappointment from the usually excellent Stephen Frears. This worked as Posy Simmonds' comic strip, as her illustrations were able to convey her mordant satire, but as a film it's just another not very well constructed melodrama. The two feral school girls were the best characterisations, and although everything was well played, it seemed like a waste of talent all round.

I was pleasantly surprised by this film as I'd been told to expect disappointment as a fan of Tamara Drew in the newspaper. However, I thought it portrayed the setting and characters really well - particularly the schoolgirls obsessed with Tamara's life and rock star boyfriend. Those scenes were well acted and very funny and I eneded up really enjoying the film despite its bad press.

I really liked this flim. Tamara is the archetypal sexy girl who disturbs the rest and repose of a community very thoroughly and deliberately. It's quite witty in its way and amusing. I liked the Englishness of it and could identify well with some of the characterisations of a typical English vlilage. I would definitely recommend it, it's not at all predictable either and for those that like these offbeat types of comedies it's an excellent choice.

After several years working as a journalist in London Tamara Drewe (Gemma Arterton) returns to her farmhouse childhood home with a absent father complex and a new nose. Once she’s home again she has a run in with old flame Andy (Luke Evans) and before she knows it is engaged to rock-star drummer Ben Sergeant, played by Mamma Mia’s Dominic Cooper. However a little interference from a couple of local school girls puts an end to that romance and Tamara finds herself seeking solace in philandering author Nicholas Hardiment (Roger Allem).

Based on a comic strip by Posy Simmons that was said to be a modern-day rendering of Thomas Hardy’s Far From the Madding Crowd, the film follows the lives a few small town people as they try to keep their strangely mixed up love lives in perspective; a long with their individual aspirations of freedom, intellectual satisfaction, simple comforts and respect.

Despite being named after Arterton’s character the film portrays her as fairly stuck-up and self righteous character, yet in a strange way she is endearing, somehow her troubled childhood rescues her from being completely hateful. By the end of the film however it’s not Arterton that you find you’ve fallen in love with.

The characters that utterly steal the film however are the brilliant performances from Jessica Barden as “Jail Bait” Jody and Tamsin Greig – finally appearing on a real farm after years on BBC Radio 4’s The Archer’s - as vulnerable house wife Beth Hardiment. Beth is sweet and forgiving and totally believable with her quiet strength and emotional intensity, whilst Jody; who feels utterly trapped in her small town world, will do anything to be with her idol, and Tamara’s fiancé, Ben. Her flippant and throwaway lines are hilarious and sharp as a blade, so much so that before you know it you think she deserves Ben more than the somewhat self involved Tamara.

The film is quirky and even silly at times, but it is truly a diamond in the rough, with some badly timed puns; a death scene strangely reminiscent of Disney’s Lion King, with cows; and a few misplaced toilet jokes, but it has an honesty and simplicity to it that is refreshing and can not help but leave a smile on your face.