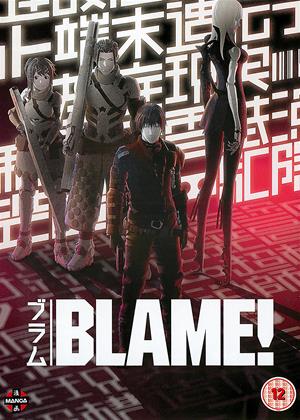 The premise of Blame is one far too common for Japanese anime in post-apocalyptic settings that I couldn’t blame (no pun intended) anyone for getting this film confused with numerous other Japanese anime of similar design. It has all the familiar components. Evil robots with emotionless faces that scurry to across the metal floors to kill all humans. An emotionless male warrior of astounding power and pretty-boy looks who comes to the rescue. An emotionless female warrior with equally astounding power and a cosplay-worthy outfit who comes to kill more humans. Design wise, I started to get flashbacks of Gantz with all the red environments and the deep black leather of the hero.

But let us give the anime its day in court. Based on the manga by Tsutomu Nihei, the story is set in the future where an Internet-based virus has wiped out most of humanity, dooming its technology-reliant cities into relics of metal and circuitry. The now-dead automated cities leave the human population residing below, a select view making treks to the surface to retrieve food and supplies, whatever remains. But they’ll have to stay one step ahead of the evil robots scurrying through many tunnels, halls, and buildings, waiting to strike with their sharp claws and scary emotionless masks. And given a large number of robots still eager to hunt them down, their fancy suits of scanning for supplies and maintaining oxygen will do little to stop them, even when the humans come armed with plenty of weapons.

Just when it seems like all hope is lost, the silent wandering warrior arrives to save the day, dubbed a suitably ludicrous handle of Killy. Killy’s personality is an all-too-common one of post-apocalyptic anime; the samurai style assassin who spends his days killing and helping the weak. When not shooting hordes of robots with his gun that has an absurdly large amount of energy it expels, he’s passing out rations and trying to help the humans find some more food. And after he finds a more helpful yet less expressive robot willing to help, the prospect of finding more food sounds even more doable with more working knowledge of the technological relics.

From there the film pretty much writes itself. Humans go looking for more resources and are attacked by more advanced and newly awakened robots that further threaten their home, ala Matrix Revolutions. And, naturally, there’s more of a villain with a face leading the assault, though its an antagonist just as cold and emotionless so it’s more of a cosmetic addition than any new sort of tension or menace. Even with a twist of a secret agent, the third act essentially amounts to how many humans the robots can kill and how big a blast the super-powered cyborgs can fire off.

But for essentially descending into a soulless action fest where excessive explosions and blood trump real emotional engagement, the cel-shaded 3D animation is not too shabby. Coming a long way from the days of the more muddy Appleseed movie, the use of ink lines and hard colors feels much more fluid and far less chunky, where there’s actual speed and gravity for staging believable action scenes. Technically, the film looks spiffy, if not at all distinct from a number of other cel-shaded anime features, though more soundly designed to avoid being entirely bland.

While I can’t vouch for the manga, which I’m sure is more in-depth and lengthier to meet a meaty volume order, Blame as a movie serves its purpose as mostly cold meat and potatoes post-apocalypse anime. It gets the job done but with the tasteless realization of the same anime with a lesser taste.