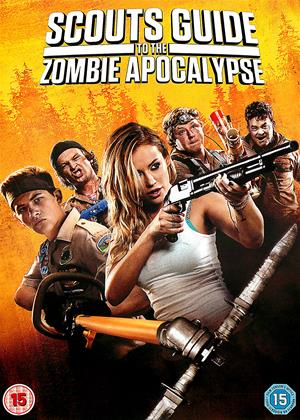 Rent other films like Scouts Guide to the Zombie Apocalypse

Reviews of Scouts Guide to the Zombie Apocalypse

Scouts Guide to the Zombie Apocalypse (aka Scouts vs. Zombies) review by Mark McPherson - Cinema Paradiso

I was in the Boy Scouts and never once felt prepared for the zombie apocalypse. Unless I could defeat a zombie by tying a sheet bend knot or reciting the Boy Scout oath, I’d be screwed. And I was one of the better Scouts of my troops. The teenage Scouts of this movie, written with all the awkward and perverted nature of typical teens, wouldn’t fare much better with their Scouting abilities. They don’t need to be Scouts as almost none of the lessons or expertise of their rank come into play; it’s just a teenager versus zombie picture that doesn’t have much of an angle.

Our three teenage heroes are the most a-typical of any teen picture. Ben is the best-looking of the bunch too shy to ask out a girl he’s had a crush on. Carter is a perverted loser complete with the backwards baseball cap. Augie is a tubby nerd who spends too much time following the rules. Will Ben land a date with his crush? Will Carter feel some boobs? Will Augie ever prove his coolness? Will anything exciting happen? The answers: yes, yes, yes and no.

What I found most perplexing about a movie such as this is that it sets up all these opportunities to establish itself and never settles on a singular tone or theme. There’s a gross-out nature in how the teens are bled on by zombies and, in one particular gross scene, yank off their genitals. But the movie only delivers a handful of these scenes and never capitalizes on them. If the movie is willing to go so far as to have a long zombie penis be comically torn off, why didn’t it have the courage to feature some more ripping of flesh? Most of the zombie attacks features the undead biting into humans off camera or from behind. It’s akin to watching an action picture where lots of cars explode, but you never once see anyone get shot.

There’s a chance for the Scout angle to play a part in how these kids dispatch the dead, but it doesn’t go much further past tying up some zombies and using condoms to snatch a key for the jail cell they’re locked inside. Come to think of it, when was the last time in a movie you saw a prisoner make a desperate attempt to snatch the unlocking keys? And since when do teenagers still wear baseball caps backwards and lust after a strip club as opposed to internet pornography? Was this movie originally meant to take place in the 1990s or are these kids caught in a time warp?

The zombie threat is not very interesting at all, merely an experiment that’s gone awry. The trio do not even discover the zombies until they witness a zombie stripper and even then not until she bleeds all over them during a pole dance. The zombies are killed by normal means of shotgun to the face, blades to the head and grenades to the torso. Nearly every kill is computer animated and lacks in just about any sense of disgust or creative brutality. I will give the movie some credit in how Augie was clever enough to use a potato gun as a weapon against the zombie hordes. If only there were some practical effects to showcase how hard a potato might slam through zombie brain, this aspect would have been exciting.

This is such a passive zombie movie in how it doesn’t really surprise or entertain, merely fulfilling the minimum requirements. The army is involved as they must quarantine the zombie-infected city, but they’re mostly absent. There’s a romantic subplot, but it’s filtered through the most cliche of depictions, right down to the slow-motion reveal of Ben’s love interest. David Koechner, who keeps popping up as an infected zombie Scout Master, has very little to do. And when the movie has to result to a zombie singing and dancing to Britney Spears, I knew there was just nothing here. Give me Thriller any day.