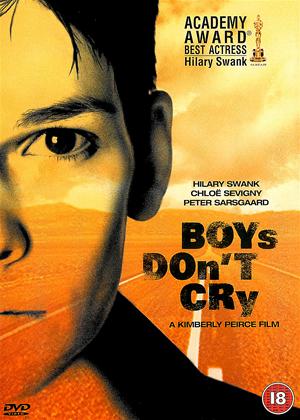 Although Hilary Swank won an Oscar, I didn't find her at all convincing - Boys Don't Cry review by RP

I recently saw and was impressed by director Kimberly Peirce's 2008 film 'Stop-Loss' and looked up her earlier work and found her 1999 film 'Boy's Don't Cry'.

This is a drama based on the true story of Teena Brandon who, undergoing a sexual identity crisis, lived as a boy named Brandon Teena. Unfortunately her new found male 'friends' discovered his/her true gender and were a tad unsympathetic, beating, raping and shooting her.

Hilary Swank won an Oscar for her role as Teena/Brandon. Frankly, I suspect that was for her boldness in a taking a part that addresses the question of gender identity, an issue that mainstream society can find threatening. I did not find her at all convincing as Brandon and could not imagine that Brandon's girlfriend Lana (played by Chloë Sevigny, who was also Oscar nominated) could be deceived.

To give you a flavour of what the film is about, here's a section from the end credits:

"A special thanks to all of the transmen and butch dykes who helped, advised and auditioned for this project and supported the process of bringing this story to the screen."

The soundtrack is rather good, with many country and country blues numbers, but unfortunately I didn't enjoy either the film or the acting. 2/5 stars.