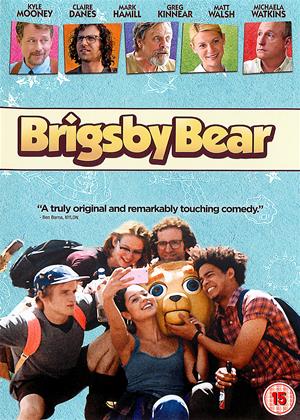 Give this film a go. Most people will like Brigsby Bear, he’s a nice sort of bear. - Brigsby Bear review by DS

I do a lot of minor and wishy-washy complaining about the current state of the cinema and film-making. Too many explosions, too many comic book films, too many sequels and remakes so in my egotistical way it seems as if Dave McCary, Kyle Mooney and Kevin Costello have been listening to me and made a film that I wanted to watch.

Well if they did (they didn’t) they were listening very well and understand me. In my case, this film is a perfect fit. Exactly what I wanted to watch at the right time, telling the right story in the right manner.

I suspect this movie won’t have a huge audience and it is shame as it reminds me of the strange and quirky films of my youth that would pop up on BBC2. Things like Harold and Maude and Brewster McCloud which so fascinated me with their quirky characters and odd storylines. The last film I viewed that captured me in such a way was the similar Wristcutters: A Love Story, although not the same type of story but made in the same spirit. Just like Wristcutters this film is easily going to be high on my favourite films list.

I won’t go into detail on the story because the less you know about how it all pans out the better but this film has pathos and fun by the bucketload and for once, and in a refreshing change from a lot of films, nearly all the characters are basically nice people without bringing any saccharin to the screen.

I’ll admit I don’t know much about Saturday Night Live’s Kyle Mooney but he is in that small group of comedians who can act with the comic brush in one hand whilst dabbing on drama with the other at will, without making the performance jarring or showy.

All he had to do was make sure the director was on the same page as him – he was, Dave McCary is a lifelong friend – and populate the film with quality actors. He did. Greg Kinnear is, as usual, standout as the kindhearted cop, Mark Hamill and Jane Adams manage to imbue some depth to their mainly unsympathetic characters and Matt Walsh and Michaela Watkins bring reliable believability to their pivotal roles. I’m saving a lot of my praise for Ryan Simpkins who is believable as James’ long-lost sister, both spikey and loving as the story moves along, and Jorge Lendeborg Jr. who is so great as the loveable nerd Spencer that I wanted him to be my friend.

And yes I did look at the pretty blonde lady and say to myself ‘Is that Clare Danes?’ It was.

There is no doubt this is a well-written, well-directed, well-acted film lovingly crafted by the makers, it’s a film about transformation, love, redemption and the wonder of imagination and friendship. It hasn’t got a bad bone in its body. It’s not perfect but what is?

I will be purchasing this for my Blu-Ray collection. I buy very few discs to keep these days so that is the best way I can praise this.

Fun, different, original as you can get in 21st-century cinema and with additional Andy Samberg.

Why not give it a go? I reckon most people will like Brigsby Bear, he’s a nice sort of bear.

This movie starts oh so brilliantly - the viewer is trying to work out what's going on with this video-watching young man and his parents.

Plot point 1 makes this clear, then leads to the less successful and saccharine acts 2 and 3.

But the first act, where Mark Hamill stars, is superb and may be the best opener to a movie I have seen in a decade.

I just hated the way it became a teen American love-in after that, and the way sentimentality and schmaltz are allowed to swamp the original premise. All completely unbelievable, however - it's a fantasy rather than a possible 'true story' esp when one sees how some police in in behave.

There’s a soft spot in my heart for any film about filmmaking that approaches making a movie with a grand sense of imagination and determination. Brigsby Bear is one such film that brilliantly balances the weirdness of the movie being made and the fish-out-of-water drama about learning to cope with a world the hero doesn’t understand. It also has a spot-on 1980s vibe to the very figure of Brigsby.

James (Kyle Mooney) has grown up in an odd and closed environment with his loving parents Ted (Mark Hamill) and April (Jane Adams). Aside from living inside a cult-like environment of a bunker, he is a big fan of the Brigsby Bear Adventures, a series of videotapes about the adventures of a talking bear. James has been watching this show since he was a child and it has grown up with him, evolving from an adventure show that taught math to be an epic science fiction tale, running over 700 episodes.

It isn’t until James is rescued by law enforcement and questioned by the curious Detective Vogel (Greg Kinnear) that he realizes the harsh truth: He was abducted as a baby. It’s going to be a big adjustment to the outside world and residing with his birth parents (Matt Walsh and Michaela Watkins) but James is really only distraught about one major change. The Brigsby Bear Adventures were only known to James, as his faux parents faked internet chatrooms about the program. The show was produced by Ted and his arrest essentially means no new episodes and no end to Brigsby. As James slowly learns about the world outside of his compound, he discovers movies and how anybody can make them. His dream project of making the Brigsby Bear movie is set once he convinces a few other teenagers to join him.

James’ mission to make a movie is a surreally sweet journey that is far more than just a fish-out-of-water adventure. His birth parents see his obsession with Brigsby as dangerous brainwashing, something created by a creep and should be washed away for something less sinister. It isn’t until much later on that they and James’ friends realize this is what keeps him motivated to move forward. He doesn’t want to leave Brisby in the past but take him into the future as something of his own. In doing so, one can naturally see the bigger allegory, how one can take tragedy and transform it into something better. Not once does James see Brisby as anything short of a calling that guides him, even if some of Brisby’s lessons were oddly specific about keeping corridors cleans and not masturbating too much.

The plucky nature of James is so infectious that the more cynical adults soon warm to his ways. Matt Walsh avoids slipping into the suburban bumbler he’s usually known for and becomes the more understanding and chipper dad. Greg Kinnear opens up about his failed acting career that led to him being a cop and grows fond of James’ words that he not only helps sneak out Brisby props from lock-up but aids the production of the Brisby movie. Even Mark Hamill is visited in prison and isn’t the least bit surprised that James has turned out inspired and intelligent, even if he is still a bit weird watching him do the voice of Brigsby in person.

Brigsby Bear has some obvious allegories to not being understood or accepted, which can be related to anything from coming out as gay to transgender. But the film soars brightly because of James’ unwavering love for what has defined him, the fears of being mocked and ridiculed not as pronounced. He knows who he is and what he wants to do, generating far more than pity from those around him. And that’s a beautiful display of spirited confidence that carries far beyond inspired movie-making.