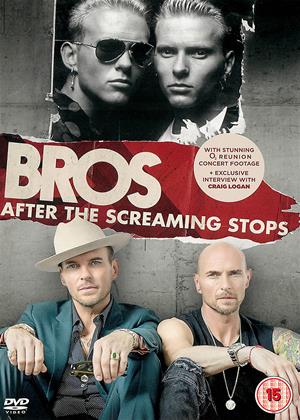 Synopsis:
In the 1980's, "Bros" were one of the biggest bands in the world - for 15 minutes. Having sold out stadiums around the world, they were the youngest to this day to play Wembley and their 'Push' album went to Number 1 in over 20 countries, selling 10 million copies worldwide. The rise and fall of Bros was meteoric. This film charts twins Matt and Luke Goss's reunion 28 years on, having hardly spoken and not played together since their split.
With an incredibly fractured relationship and only 3 weeks to go until sell-out gigs at The O2 London, will they be able to put their history aside and come together as brothers to play the show of their lives? A raw and emotional look into the aftermath of fame and the re-connection between two twins torn apart by their past.
Actors:
Luke Goss, Matt Goss
Directors:
Joe Pearlman, David Soutar
Producers:
Leo Pearlman
Aka:
After the Screaming Stops
Studio:
Spirit Entertainment
Genres:
British Films, Documentary, Music & Musicals, Performing Arts, Special Interest
Countries:
UK

Rent other films like Bros: After the Screaming Stops

Reviews (3) of Bros: After the Screaming Stops

Everything in between - Bros: After the Screaming Stops review by JT

I haven't enjoyed myself as much in a long time. I wasn't expecting to like this film - I didn't much take to Bros back in the day, and wondered what on earth they could bring to the film world in this day and age. However, I was pleasantly surprised. I laughed, cried, and everything in between. I think what the lesson (if there is one) in this film is that everyone is human, and even though some are projected into stardom for whatever reason - we remain human and this is what is never take from us, even though the stardom is so often all to brief. These guys weren't shy in showing their vulnerable, touching, down-to-earth, even clueless side - which I loved. As a piece of film it's one of the most entertaining and heartwarming you'll ever see.

Highly Enjoyable Doc about a Boy Band from 1988, with classic so-bad-its-good bits - Bros: After the Screaming Stops review by PV

I always hated Bros - they were a fad for silly girls when I was at university in 1988 and fizzled out pretty quickly. I always through the songs by Bros were dross!

This is a reunion, perhaps to cash in as most music income for all artists now comes from live concerts not records or CDs, and downloads pay pennies as does YouTube.

Some of the lines here are SO BAD THEY'RE GOOD - a complete lack of self-awarness of the LA-based brothers makes it all even funnier.

One surprise was the genuinely moving parts about their late mother.

I enjoyed this a lot, like SEARCHING FOR SUGAR MAN or KILL YOUR FRIENDS or KILLING BONO or FRANK - all great music business movies.

Subtitle: As written by Ricky Gervais - Bros: After the Screaming Stops review by JY

Whilst this is a serious (and occasionally sad) look at the fall out / aftermath of success in the late 1980s, it is also hilarious.

Whether this is intentional or not is debateable (you would hope that the boys were ‘in on it’, otherwise some of what’s said beggars belief). Wait for the bit where Matt describes a song he’s written called ‘Kings’ (or ‘We are all kings’), if you don’t crack a smile after... well. And ‘Rome wasn’t built in a day...but we don’t have as much time as Rome’.

Ultimately I didn’t warm to either of them, I didn’t care about what they’d been through. There is a scene towards the end where they are rehearsing a song which I believe is about, or references, their Mum, and at that point I felt a flicker of sadness as they were clearly very emotional. But apart from that I didn’t think this film brought me any closer to them.

One for the fans, then. Of which I most definitely was not. I watched it as a fan of music in general, and was interested to see if it said much about that time. I wasn’t turned on to their music, or the brothers themselves. Oh well...