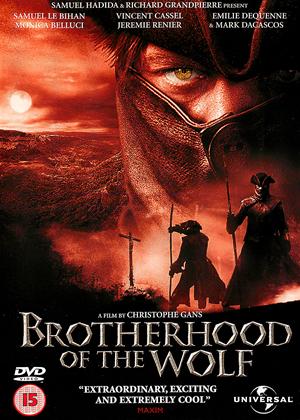 Reviews of Brotherhood of the Wolf

Brotherhood of the Wolf (Le pacte des loups) by director Christophe Gans is a one-at-a-time film which I’ll go out on a limb to say that they don’t make them as they used to before. I mean, where did the meticulous cinematography, highly-believable acting, detailed historical costumes, near-perfect pacing, and a hell of a story go? Is it the budget; the actors; the politically correct climate that prevents such masterpieces from seeing the light of day? Who knows. All that I can assert for certain is that Brotherhood of the Wolf is, without a doubt, one of the best non-English speaking films of all time, and probably one of the better films generally full stop.

The film features some of the most prominent French actors, including Samuel Le Bihan as the stoic but emotionally reachable Grégoire de Fronsac and Mark Dacascos playing a mysterious, agile warrior simply named Mani. These two comprise the ultimate unlikely duo ever put to screen, and this is exactly why their chemistry is near-perfect and hasn’t been beaten in modern cinema for over nearly 20 years as of now. Then, there is the always charming yet brutish Vincent Cassel playing the part of such Jean-François, an authoritative figure whose motivational roots go deeper that what was initially thought for him to be. Finally, Émilie Dequenne also makes an appearance as an alluring woman with an unknown past who may or may not come to aid for our heroes. As for the adversaries, well, you’d have to figure all of that out because that’s where the most of the fun lies.

Oh, and there is also a brief but powerful appearance by none other than the eternally youthful Monica Bellucci playing Sylvia. She owns the role and that’s everything you need to know.

Now let’s talk about Brotherhood of the Wolf’s technical details for a while.

The color choices are nearly perfect. Days feel like days, nights like nights. There is no blurry scenes (well, except for ones that utilize the then CGI, which is also surprisingly good to say the least); if you compare the film with today’s features, you’ll notice an absence of extensively orange VS blue saturation, simply because the filmmakers here chose to utilize all colors form the wheel as best as they could’ve done it. This makes for an excellent viewing (especially the Blu-ray version) and puts many of todays so-called “films” to literal shame. Which brings me to my first point in the opening paragraph: why did they abandon this technique where it was clearly superior to today’s overuse of orange and blue colors to the point of desensitizing the audiences to potential boredom? I demand an answer and I want it now.

In terms of the sole art of acting itself, there is hardly one to falter with his lines and delivery in Brotherhood of the Wolf. It’s just as if everyone belongs in this world without any precedence to their histories, jobs, duties, moralities, loves, and hatreds towards each other; these are real people inhabiting real bodies, and to an alien who’d experience this film as his first contact with the Human civilization, it would make no difference from the real thing.

Brotherhood of the Wolf: watch it, it’s a time well-spent.