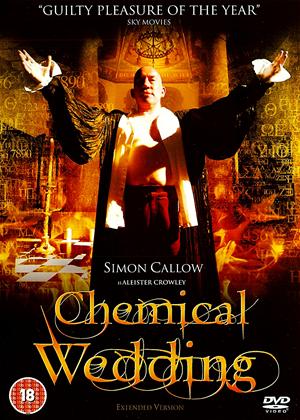 Despite his iconic pop culture status, surprisingly few movies have been made about Aleister Crowley, and all the ones worth seeing are about characters loosely based on him rather than the man himself; for example, "The Black Cat" starring Boris Karloff and Bela Lugosi. Perhaps that's because from a modern perspective he didn't really do very much to justify his notoriety. In the late 19th. and early 20th. centuries, experimenting with drugs, bisexuality and magic while loudly proclaiming yourself to be an amoral hedonist in league with the devil really did make you "the wickedest man in the world". Nowadays he'd be just another whining goth.

So it's not surprising that this movie, written by the lead singer of Iron Maiden and directed by the bloke who played the cop who put his hand over the camera lens at the end of "Monty Python And The Holy Grail", gets almost nothing about him right other than for once pronouncing his name correctly (it rhymes with ravioli). Aleister, it seems, was not only a genuine magician, but also a demented serial killer whose mostly female victims are murdered for no real reason other than to allow us to leer at their nude bodies before and after death. And when he wasn't managing to appear clever by quoting his own books he behaved like a rabid chimpanzee.

Simon Callow, a shameless ham who overacts so enthusiastically that a lot of people think he must be good, gives it all he's got as a mild-mannered professor of literature who, for reasons so inadequate that I've already forgotten what they were, does unwise things with computers and quantum physics and other subjects of which the makers of this film are blissfully ignorant, thus getting himself possessed by the spirit of Aleister Crowley. As you do. And soon he's lurching around spraying everyone and everything in sight with all available body fluids (and the occasional solid) while burbling quasi-profound pseudo-historical waffle blatantly ripped off from "The Da Vinci Code". The rest of the cast, as in so many cheap, pretentious horror movies, range from elderly character actors with familiar faces whose decades of experience enable them to bring some dignity to the proceedings, to handsome youngsters whose faces you probably won't see anywhere else - whoever that female lead girlie is is as wooden as the proverbial very wooden thing.

I suppose if you think John Carpenter's "Prince Of Darkness" is a masterpiece that perfectly blends plausible science with believable occultism, you may find this film perhaps as much as a quarter as good. And if you know anything at all about real science, you'll get a few giggles from the scenes where scientific geniuses explain the basic laws of physics to each other wrongly, almost as if they're quoting "Quantum Physics For Dummies" from memory. But overall it's an absurdly misconceived and often grossly disgusting low-budget attempt to combine sci-fi with supernatural horror that fails dismally on every level. Unless its real purpose was to discourage viewers from experimenting with sex magic by making it look less fun than cancer. In that respect it succeeds admirably.