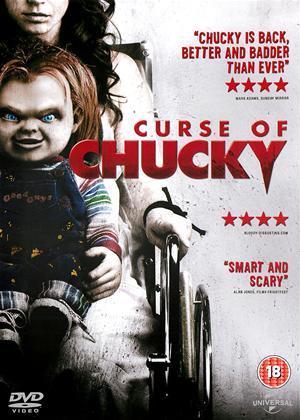 Reviews (1) of Curse of Chucky

Curse of chucky - Curse of Chucky review by CP Customer

In an age where horror has returned to more conventional roots, with small budget horror flicks taking centre stage, it should be nice for a bit of nostalgia as Brad Dourif brings his titular puppet back for one more go around of sadistic killing and idiotic motives. Then again, with this being the 6th instalment in the dated series I couldn’t quite understand the point besides boring audiences all over again.

The film follows the story of what happens when Chucky (Dourif) is delivered to the house of Nica (Dourif’s daughter Fiona), a wheelchair bound woman who lives with her protective mother. When her mother dies mysteriously her sister comes to settle the estate and all hell breaks loose.

Much like the many other versions of Chucky available in bargain buckets everywhere, Curse of Chucky scrapes the bottom of the barrel as it reuses the same material, tired build ups and irritating character traits to create a story so similar to its predecessors that you can imagine someone put the previous 6 scripts into a blender and went from there.

Directed by longtime Chucky writer/director Don Mancini, Curse of Chucky tries to flesh out the murderous plastic monster by delving into his past, something that effectively rids Chucky of his menace and maniacal nature as to understand him takes what little fun the film had left out of it.

An out there twist about halfway through the film feels like a step by Mancini to reinvigorate proceedings but it carries with it no weight or meaning, nothing to make it seem anything more than mindless.

The whole film feels unfinished, disjointed and cheap with little attention being paid to any part of the film’s grand narrative as Chucky kills for the sake of it. A cameo by Jennifer Tilly may entertain longtime fans but it does little to improve this tale making Curse of Chucky a colossal waste of your hard earned time