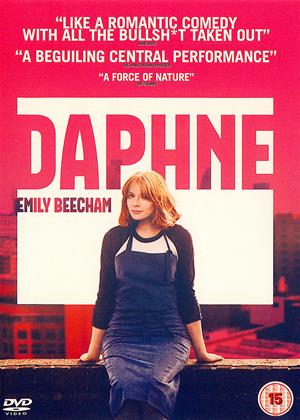 Don't waste your time watching this - Daphne review by CKM

If I was around someone like Daphne I'd run a mild, selfish, self-absorbed, nasty girl .... not one redeeming quality in this poor excuse for a human being. God knows why Geraldine James took a part in this awful film - one can only think that she has a large mortgage to pay and there wasn't much stage work around .... hopefully she will bury this in her CV.

I don't even understand why a film like this was made .... give it a wide berth.

not a comedy - Daphne review by OP

Why was this classed as a comedy? Its certainly not funny and it limps along jumping from scene to scene in a disjointed way without really adding up to anything. The acting was good but the characters portrayed ,on the whole, were disappointing and very difficult to identify with.

Except it doesn't match up in my opinion. Yes, we know life in the big city is tough, it's been done so often it's become a cliché. And why does the main character always seem to be cold, aloof and rude? This leads yet again to credibility being stretched to breaking-point as to why these friends of hers want anything whatsoever to do with her, and why her Mum hasn't given her a piece of her mind.

Drinking is highlighted as a symbol of her downhill spiral, yet the insane pursuit of smoking is only referred to as ruining her palate!

I couldn't believe this was less than 90 minutes. The very similar "Margaret" was twice as long yet grabbed my attention from start to finish, whereas here I'd lost interest, and patience with the leading character, long before the end.

OK, perhaps I need to be "edgy" and "with it" to get this film and sympathise with Daphne. But I'm afraid I'm not, so I don't.

A strangely involving film, the main character self destructive and vulnerable in a knowing way. It isn't a romantic comedy, hard to see why it was suggested as that. The music is very well chosen and subtle. Emily Beecham has strong talent.

It's quirky and heart warming. I enjoyed it. And it's a film that stays with you. I wouldn't want to see it twice but it was good.

Potential but... - Daphne review by PL

...there's a moral to the story but it's not a very sophisticated one. Like other reviewers say, it's hard to identify with the protagonist and god knows how she maintains any friends.

What a waste of lottery money: Shameful! Where is the storyline and the reason for watching this rubbish? The main character needed some discipline from someone and what a scene to be left in my brain of her shaking that used condom in her drug dealer’s mouth - lovely!