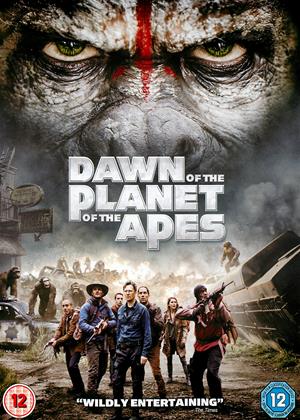 Rent other films like Dawn of the Planet of the Apes

Reviews (2) of Dawn of the Planet of the Apes

Really enjoyed this follow up Apes film, carries on 10 years after the last film . Good story a and good action.

To be honest, I was a little disappointed with this film. Everybody talks about how wonderful the CG motion-capture special effects are compared to those pathetic rubber masks in the previous franchise (Tim Burton's woeful effort doesn't count), but you know what? Back in 1968, everybody went: "Wow! Those ape costumes are incredible!" Which, compared to every gorilla suit we'd ever seen up to that point, they were. We're getting spoilt!

Let's pretend that this film isn't about apes versus humans, but escaped slaves in the Wild West who found a wilderness settlement that attempts to recreate the half-remembered African life they were snatched away from, but inevitably come into conflict with a bunch of heavily-armed white folks running the gamut from not racist at all to full-on KKK. It would be very nearly the same film, but since we wouldn't be sitting there going: "Wowzers! The black characters truly look as if they're being played by actual humans who are black!", we'd all be more aware of any deficiencies in less effects-heavy areas, such as characterization and plot.

And frankly, there are quite a few. Nobody in this film comes across as all that bright, including Caesar, who in the previous film was established to be very intelligent even by human standards. Much of what the characters do makes no sense unless they've read the script and know they're being set up for a battle with antagonists whose existence they don't yet suspect. For example, why would humans with no apparent enemies in an almost totally deserted world feel the need to huddle inside one pointlessly fortified building and obsess about the fact that they'll die unless they obtain vast amounts of electricity in a ridiculously convoluted way, instead of becoming 19th century farmers? Answer: because they'd get slaughtered far too quickly if they were inexplicably attacked by... ooh, I dunno - chimpanzees on horseback with assault-rifles, perhaps? Hey, it could happen!

And don't you get sick of those frantic and very long fights the hero always has to indulge in that inevitably take place in a building that's for some reason in the process of falling down? The ones they include so that every blockbuster will look like a computer game, and hopefully spawn one? If you think I'm being cynical, look how much, or rather how little screen-time and character development Caesar's mate gets. That's because the target audience want fighting and shooting and things blowing up, not love-scenes between two characters who are not physically attractive by human standards. And poor old - I forget Mrs. Caesar's name, if she even has one - still features vastly more prominently than any other female ape. In fact, out of hundreds of other on-screen apes, 50% of whom are presumably female, I don't remember a single one of them being identifiably non-male.

An intelligent big-budget action blockbuster? Yes, in the same way that some superhero movies are less goofy than others. But ultimately, this film is an excuse for Mad Max-style battles with an overlay of seriousness which only seems deep because most movies of this type have even less. Don't expect "Hamlet Vs. Macbeth, Only They're Monkeys", as some critics would have you believe. Though on the plus side, it looks very expensive, there are some excellent battles, the apes really are convincing, and Gary Oldman is as good as he usually is in what's rapidly becoming his misguided-sort-of-good-guy default performance.

The Planet of the Apes movies have come a long way from the campy costumes and the strange sci-fi concept of the original 1960’s film. Now, after several sequels, prequels and remakes, the Apes franchise has finally reached the pinnacle of possibilities with this dark, emotional and character driven entry. It’s as if director Matt Reeves sat down and tried to figure out how to make the best Apes movie ever made. Not only does he succeed at accomplishing just that, but he ended up making one of the best blockbusters of the year with real heart and smarts.

Taking place a decade after the events of Rise of the Planet Apes, the human race has dwindled after the dreaded airborne ape flu engulfs the earth. Our pain is the apes gain as the same virus makes them grow more intelligent and collected. The spark of this new age is the ape Caesar (voiced and motion-acted by Andy Serkis) who leads and defends his ape brethren in the forest. They hunt for food, bear children and teach their young how to read, write and speak. Not far from their establishment, the humans struggle to maintain their own camp with few resources. Their only hope for survival is to reactivate a dam deep in ape territory. A group of humans attempt to negotiate their way into the dam and repair it under the terms that they’ll get in and get out quickly. Unfortunately, there are fearful, greedy and stupid individuals on both sides of this conflict that turns everything bananas.

The human antagonist is Dreyfus (Gary Oldman), a bitter leader who vows revenge for the loss of his wife and child to the ape flu. The ape antagonist is Koba, a jealous second-in-command who believes Caesar is too weak and misguided to use his power. Both of them want the same thing: a life without the other race. They represent the worst of a world that cannot get along. Caught in between this feud is an empathizing group of humans and a bitterly frustrated Caesar. They both want their own people to survive by maintaining a treaty and perhaps even forming a truce. But with so many forces of fear working against them, they seriously question if peace can ever be built between humans and apes co-existing. Of course, we know that it is ultimately the apes who will take over the planet given their current track record, but it will not be an easy victory or a painless procedure.

The biggest hurdle for a film like this were the special effects. It wasn’t so much hindering on how fantastic or exciting the action sequences appeared (though they are brilliantly depicted), but just selling the appearance of the apes themselves. There are several scenes in the films where there is not a single human being on screen as we observe the apes talk among themselves in sign language and bits of vocal phrases. And there is plenty of emotion emitted from these CGI characters to make them both believable and emotional. It gives us a reason to invest in these creatures so that when the inevitable explosions and gunfire starts up, there is a reason to care about what is going on and who might be killed.

Thanks to the motion capture acting of Andy Serkis and the animation of WETA studios, we believe these apes and never once feel off-put by their presence on screen. Caesar displays a wide range of conflicting feelings for his own race and the humans just down the road. There is fury, pain, grief, sadness, joy, concern and deep thought all present on his face and his body language. You completely buy into him as a real character and not just a special effect. This allows us to appreciate the story itself which is just as strong as these renderings if not more so.

Dawn of the Planet of the Apes is a masterpiece of the sci-fi/action genre both from a technical and storytelling angle. If I were to tell you 20 years ago that there was real story and heart behind a film about apes taking over Earth, you’d think I was mad. And, yet, here we are in a cinema world where ideas so simple and often silly can be brilliantly conceived into real movies of character depth, intense action and technical wonder. All the pieces needed to connect so perfectly that if even one element was off it would all tumble down. The film stands strong, however, and for that it is one of the most intelligent blockbusters of the year. That’s some progress for a film franchise that once began with rubber masks and awkward mouth movements.