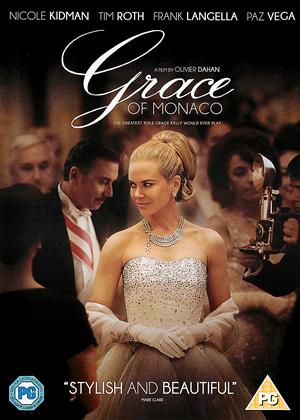 Synopsis:
Set in 1962, six years after her celebrated wedding of the century, 'Grace of Monaco' is an intimate snapshot of a year in the life of the twentieth century's most iconic Princess - Grace Kelly - as she strived to reconcile her past and her present, a yearning for a return to the big screen with her newfound role as a mother of two, monarch of a European principality and wife to Prince Ranier III.
While contemplating overtures from Alfred Hitchcock to return to her career in Hollywood, Grace found herself plunged into a personal crisis when Rainier's modernisation of an ailing Monaco was halted by Charles de Gaulle - the French President - and his attempts to not only impose French taxation on Monaco, but reclaim the principality for France by force. Grace of Monaco is a real-life fairytale, a sweeping romance, a portrait of the cinematic legend of Princess Grace and a realisation that love is much more than a passion, but an obligation.
Actors:
Nicole Kidman, Tim Roth, André Penvern, Frank Langella, Paz Vega, Parker Posey, Milo Ventimiglia, Geraldine Somerville, Nicholas Farrell, Robert Lindsay, Derek Jacobi, Jeanne Balibar, Flora Nicholson, Yves Jacques, Olivier Rabourdin, Roger Ashton-Griffiths, Jean Dell, Philip Delancy, Ron Webster, Catherine Schaub-Abkarian
Directors:
Olivier Dahan
Producers:
Arash Amel, Pierre-Ange Le Pogam, Uday Chopra
Writers:
Arash Amel
Studio:
Warner
Genres:
Drama, Romance

Reviews of Grace of Monaco

Yes I am Australian, but no, I’m not much of a fan of Nicole Kidman. Unlike what some may believe, it is not a requirement of citizenship. The film has definitely had a rough go by the critics, and despite the locations and costumes being beautiful, the film as a whole just isn’t up to the standards set by others.

Grace of Monaco is obviously a story about Grace Kelly - a former Hollywood star. She is constantly surrounded by adoring fans, protective guards, wanting producers, and desperate photographers. She is married to Prince Rainier III (Tim Roth), and becomes what many little girls dream of being. However, there are issues with France’s Charles De Gaulle and a looming French invasion, the royal’s marriage is struggling, and Kelly desires a return to Hollywood.

There are aspects of this film that were done well. You do feel like you are back in the glamorous days of Hollywood, with flowing gowns, men in suits with slicked hair, and big personalities. The costumes were true to the time and the props made you feel nostalgic - even though I wasn’t born for another 30 years.

The locations and sweeping landscape shots were perfect, and echoed the magnificence of the lives of most Hollywood starlets.

Now, about the acting. Not all of the performances were spot-on. As I said before, I’m not much of a fan of Nicole Kidman, but she wasn’t ‘too’ bad. It’s a very difficult job to play a real person, and even more so when the person was loved so much. Most people have also probably heard of a lot of the cast, and they have shown they have acting chops.

The part of the film that lets the rest of it down is the issue of authenticity. Though, Kidman has said that the film is neither a documentary nor a biopic, and is instead more about Grace Kelly’s “vulnerability and humanity”. Grace Kelly’s children have also been very vocal about their dislike for the film, requesting changes and condemning it for its over-dramatics and lack of facts. There have also been fights between the French parties and the American parties over what to include, which does not make the finished product sound very promising.

The film has received very negative reviews - mostly online. As an aspiring film-writer, I shudder to think that the months (if not longer) that everyone spent on this, comes down to such bad words. For the most part, however, the critics seem to just be overly protective of Kelly, and so they might be more inclined to find fault.

These kinds of films are not particularly my favourite, but this one was not completely unlikable. I don’t know exactly where the film deviated from the factual events, but you will never get something like this that is perfect. Overall, not a bad movie, and I think it might be more well-received by the general audience than by the vocal critics.