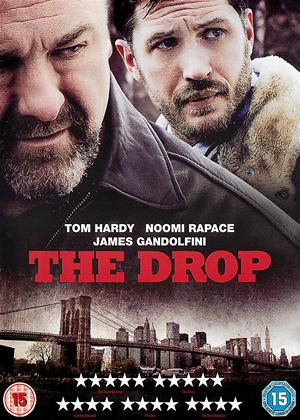 Tom Hardy reminded me of Brando in this role, his acting is sensational. He plays Bob a quiet, loneley barman who runs a bar with his cousin Marv. The bar is used as a drop to launder dirty money. Hard to say much more without giving spoilers. Good story with unseen outcome.

Hardy is a brilliant character actor, slow to answer people, you can see Bob thinking of apt replies, also his not staring at peoples faces but other things as he thinks reminded me so much of Brando. Phenomenal performance and a good film to boot.

A very slow burner - The Drop review by TJ

Ok this is a very slow burner and at one or wo points I could have given up, but I'm glad I watched it through. Violent in a very measured precise way.

Not your usual organised crime film - The Drop review by PJ

I wasn't expecting that much from this film. Tom Hardy plays a barman who stumbles upon an animal thrown into a bin after been badly beaten. It's cleverly written and acted. The story/screenplay is by the same writer as shutter island. This is a bit of a slow burner but doesn't go where you expect. Well worth a watch.

Watchable without being memorable. - The Drop review by TE

Decent entry in the violent organised crime film genre. Its most original aspect is the way it builds up the tension as to precisely when the Tom Hardy character will explode into action.

Rocco the dog is an original touch too.

Hardy is ok in his role but his Brooklyn accent is not convincing enough.

Sad to see James Gandolfini looking genuinely ill, but still turning in a good performance. This was his last film.

A surprising little gem! - The Drop review by MH

I agree, Tom Hardy (yum) delivers a brilliant acting turn in this absorbing film, as does James Gandolfini. Noomi Rapace is a disappointment, not much acting going on there, but it doesn't really matter as she is relatively unimportant.

I heartily recommend it.

A little masterpiece of a thriller, thanks to outstanding acting - The Drop review by PJ

On the face of it, the storyline of this American thriller is fairly simple: Bob (Tom Hardy) is a bartender in the bar owned by his cousin, Marv (James Gandolfini). They get mixed up with organised crime. And Bob gets drawn towards a troubled girl, Nadia (Noomi Rapace). The action takes place in Brooklyn, New York.

What makes this film so good and, in my view, a little masterpiece of the genre? The atmosphere is gripping and the environment the characters move about seems highly realistic; the suspense builds up gradually, in little unassuming touches, with fear and tension ever-present under the surface. The story also goes in directions you did not quite expect: in many ways, it is not a conventional thriller. But, mostly, in my opinion, it is the outstanding acting that is the movie’s chief asset: J Gandolfini, a big bear of a tough man, and N Rapace, a vulnerable yet strong character, are memorable.

As for Tom Hardy, he is remarkably good, in part because he is not quite what he seems to be, and I cannot say more so as not to spoil the film. He is quiet and low-key, almost dull, and yet he is the most important character, which makes the film unusual and intriguing. Who is he, really? What does he stand for, if anything?

As thrillers go, this is one of the best I have seen in the past 2 decades and I strongly recommend it.