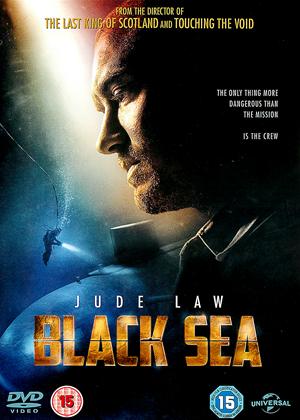 Close but no cigar... - Black Sea review by Schrödinger's Cake

Whilst the acting, filming and direction are all at points excellent, in general this film never really got it together. However, that's not to say that it wasn't enjoyable to watch. For me, it just felt like it could have been great, rather than good.

Of the cast, Jude Law seems to be maturing well as an actor, and I enjoyed watching his character's progression. Ben Mendelsohn is also enjoyable to watch, but neither the role or his portrayal are in the same ballpark as his contribution to Animal Kingdom (if you've not seen it, you could do a lot worse than add it to your todo list).

From the outset Black Sea was gripped with a surly, desperate tension which kept me watching through to the end. But the overall effect was of something that missed the mark.

sadly lacking in any tension - Black Sea review by LB

I agree with the above reviews. Jude Law was left unsupported by the other actros and the pace and tension were really poor leading to a film which had not hold. Sad.. because it was a good premise.

This film was OK - no more. Other submarine dramas struggle with the same issues - in such a confined space, conflict between men will be inevitable, and a psychological war happens, with a drip drip reveal of loyalties and the truth. It was thus in DAS BOOT the best submarine drama on film; and also in one I saw with ghosts on a sub.

Having visited a submarine in Italy, I would say this looks pretty roomy compared to the sub I went on where I was always bending down so as not to bang my head on metal!

Anyway, a plan to get gold is always fun (cf The Italian Job) and this movie is credible, incl the twists and turns.

I disliked the way Jude Law for some stupid reason has to put on a a Scottish accent. WHY? Is that the myth of all Scots being salt of the earth trustworthy fellows (just look at the cybernats and SNPO to explode that lie!). It would have been better with a London accent.

The Russians and stereotypical BUT then stereotypes are based on truth.

It may all be a tad unbelievable as it goes on, but is still watchable, so 3 stars.

I though the music was too in your face imposing though. Was it really even needed?

A good script, well filmed. What was particularly nice about this film was that the Russians were real and spoke proper Russian, not some western actor’s pathetic attempt.

Held together by Jude Law. Is a better film than most of the genre, which tend to be poorly constructed American issue. Submarine is a miracle, the way it has full bore explosions, yet maintains light and air without any problem at all. Jude prescence is continuous, and that is only reason to rate a 3 star............

Black Sea is one of those films that takes you by surprise; in a good way, that is. If you can avoid watching the trailer - which, of course, reveals almost the entire plot - you are sure to enjoy the twists, turns, and character progressions. I give this film a solid three out of five stars, and commend it for its in-depth character study.

The film follows former Royal Navy Captain Robinson (played by Jude Law). Now a rogue submarine captain, he collects a crew, and sets out to recover a treasure from the Black Sea. Stuck inside the extremely close confines of the ship, and with a crew determined to do whatever it takes to get their money, they quickly turn on each other. Who will get the money, and will there be anyone left to spend it?

This is not the first film to highlight the greed in humanity, but it did it well. For a handful of people to turn on each other when they were already set to receive millions of dollars, it is ludicrous; but something people would do. The degradation of the characters and their relationships were realistic, and it will keep your attention throughout.

I had not heard of most of these actors before, with the obvious exception of Jude Law. The performances were all as good as each other, but no one delivered a stand-out performance.

In my limited filming experience and through research, let it be known just how difficult it is to film in such an enclosed space for any extended period of time. Director Kevin McDonald definitely earned his paycheque, capturing footage that not only tells the story, but is visually entertaining and exciting.

Not only is the physical filming strenuous, but finding creative ways to use the space is what really added to the appeal of this film. The audience is made to really feel the closeness and confines of the set, but are also not restricted in their view.

So far, critic and audience reviews have been predominately positive. Like me, the majority admired the performances, visual aesthetics, and general pace and content of the story. However, for those in the know, there were noticeable errors in realism. It’s not enough to ruin the film, but you would expect more research to have been done.

Overall, this is an interesting film that will keep you entertained for a couple of hours. Don’t expect it to win any major awards, but sit back and enjoy.