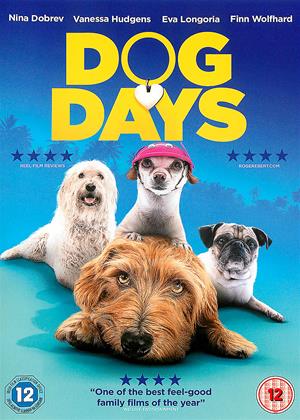 Every now and then, a doggy movie will manage to escape from its direct-to-video pen and find its way into the cinema. There’s usually a hook that allowed it to escape from the bin of endless Air Dog sequels and Snow Buddies spin-offs. There was a slew of Terrence Malick style dog movies of A Dog’s Purpose where a dog narrate’s perceptions on human life throughout the ages via reincarnation. Dog Days is not as ambitious, but for being little more than an anthology film with linking tales of dogs, it manages to at least be a bit divergence.

I say a bit because the stories themselves are not so much rousing as they are bearable. Five different rom-com arcs are given focus of in sunny Los Angeles. Elizabeth (Nina Dobrev) is a newscaster who screws up an interview and has to deal with a contracted co-host. Tara (Vanessa Hudgens) works at a coffee shop and spends her days talking to her dog and getting friendly with the dog’s vet. The vet, however, has a friend who runs an animal shelter that is really interested in Tara. Meanwhile, the couple of Grace and Kurt have adopted a daughter. A teen takes care of a dog and a widower loses his own dog. And so on and so on.

The many stories are a severely mixed bag of mildly amusing nuggets of human warmth to bland melodrama samplings. There’s a fine cast of comedic talents assembled here, but it’s sad to report they only function about as it expected for their casting in such a timid Altman-esque picture. Thomas Lennon does his usual awkward stammering he does so well, but he’s placed in a role that’s built for him to just casually stroll through. Similarly, Rob Corddry merely meanders as a shell of his former comedic self, taking care never to allow the humor to go too far. Vanessa Hudgens does decently enough to bring some dignity to a role in a film where she is crowded out by bland characters and the occasional dog.

And now we come to the great division of this film: the dogs. With a title such as Dog Days with dogs proudly boasted on the poster, one may think the film is going to feature lots of cute doggy scenes and reaction shots. Depending on who you are, there is good and bad news on this front. It’s good news that the film doesn’t go nuts with the dogs and gives a bit more character to the humans; not enough for Altman drama, but superior to trashy dog movies clearly intended more for kids to get their doggy fix. It’s bad news for those families who are hoping more for cute doggies, sure to spawn a series of one-star reviews from angry moms or bitter kids.

Dog Days, from this angle, seems like a victim of the Goldilocks Zone: Not too heavy on the dog simplicities, not very interesting as a more human drama anthology. Only when one can divorce themselves from the frankly goofy appeal of dog-movie seekers does the film even come off as mildly appealing. But for existing within a subgenre that is not exactly going to appeal to anyone who isn’t willing to vacantly stare at dogs on screen, why this film didn’t feel the need to throw in a talking dog is beyond me.