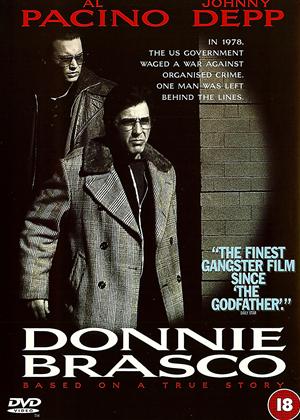 One great star makes way for another in this awesome gritty study of gangland New York. Depp is brilliant as the undercover, understudy to the father he never had, Pacino and the supporting Michael Madsen as the Boss is suitable unnerving. Love it!!

Ageing gangster Benjamin ‘Lefty’ Ruggiero is introduced to a jewel thief named Donnie Brasco. Donnie succeeds in earning Lefty’s trust. Lefty teaches Donnie the rules of the Mafia and introduces him to several ‘made men’. Donnie actually is an FBI Special Agent, tasked with unmasking the New York-based crime family Lefty belongs to.

This is one of the best gangster movies I have ever seen. The acting is very good (including Al Pacino's), the atmosphere rings true, and there is tremendous suspense. The film is actually based on a completely true story: the 'real' Donnie Brasco was undercover within the Mafia for 6 years. Johnny Depp is excellent in his part as D Brasco.

The film gives a good idea of how the Mafia operates and when/ why it resorts to violence. It seems quite realistic to me. I strongly recommend it.

Donnie Brasco puts a unique spin on the gangster-cop relationship, which provides the engine for this compelling story. The way that the characters become dependent on each other is fascinating and leaves the conclusion up in the air until the finale. I found it well plotted, not overly dependent on violence, and credible. Above all it is a human story which engages the audience through the performances of the two central characters, Johnny Depp and Al Pacino.

The constant strain of being a spy deep undercover within a gangster family is awesomely maintained. Depp's performance will take a few pounds off you. Leonardo diCaprio in The Departed might have the edge over him in this genre but that film was outstanding. This film is a close second. The references to forgetaboutid reminded me too much of Hugh Grant in Mickey Blue Eyes and broke the tension. The rules of New York gangsters were sometimes comical, I doubt they are supposed to be. Where this film excels is the close and deeply personal relationship between the undercover spy and Lefty (al Pacino), a gut turner.

Holds the attention - Donnie Brasco review by BE

Generally a good movie about an undercover FBI agent and the mafiosa. Divided loyalties arise when Donnie Brasco strikes up a rapport with gangster 'Lefty'' - this opposes the duty he has to his employers, the FBI. A well made movie although the insinuated ending is contrary to what happened in real life. Usual classy performances from the likes of Al Pacino and Johnnny Depp. Although made twenty years ago, being set in the 70's, it hasn't dated.