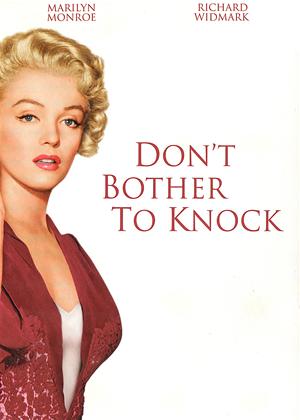 Reviews (1) of Don't Bother To Knock

Silk and Sandpaper - Don't Bother To Knock review by CH

Many assume that a film brings a novelist fame, even fortune. Who now, though, finds Charlotte Armstrong's name springing to the lips? That said, it could be well worth seeking out her books, for one of these was the basis for Don't Bother to Knock (1952) - its script the work of Daniel Taradash - and a high point is the entrance in a Manhattan hotel doorway of... Marilyn Monroe.

Astonishing to think, this was her eighteenth appearance on screen, and she was yet to make the films for which she is best known (one thinks also of Bogart's numerous early rôles). And it remains one of her best, and should be better known.

Hotels, like boarding houses, are invariably a good basis for a film. This opens with another bonus, the first appearance on screen of Anne Bancroft who sits on a stool and confides in the ever-wise barman: she laments that her man, a commercial pilot, is one of those who, in current parlance, refuses to “commit”; with which, the light goes low, she spins round, and takes to the stage for the first in a series of standards (such as “Where or When?”) which appear throughout the film, sometimes heard on the radio system in the building's bedrooms and suites.

Particularly vexed by this sound is her unsatisfactory lover, Richard Widmark who, aghast at being well-nigh dumped, has taken to his room with a bottle of rye. Through a slatted blind he sees Marilyn Monroe in a room across the courtyard, and, brazenly, assumes that she might be up to providing him with a little consolation.

She, though, has problems of her own - to say any more would detract from the turns taken by this film. Directed by Roy Baker, an Englishman, it opens, searing Lionel Newman music and all, in a way that suggests film noir but it incorporates melodrama, comedy, some Hitchcockian touches (rope, windows) - with more than a hint of tragic-toned farce as doors open and close in the nick of time. Marilyn's performance shows what how good she could be; she brings out that “silk and sandpaper” quality of which Widmark accuses her during that evening/night (the film lasts some seventy-five minutes).

Still with us, as they say, is Donna Corcoran, the young girl whom Marilyn was hired to babysit that evening. Little did she realise in 1952 that, ever after, she would be in the slipstream of legend. As the surviving fragments of Marilyn's last film show, she was good with children, she could make them laugh - though, in this case, Donna screams magnificently