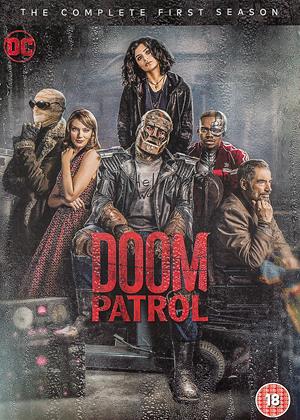 Doom Patrol has a lot of competition as not being the first superhero show of a misfit ensemble, both within and outside of DC Comics. Thankfully, the show seems to be aware of this and takes great leaps to never be predictable. The first episode comes right out of the gate addressing the lethargic tedium of more superhero medium and directly pissing off Grant Morrison fans and DC Reddit commenters. With a show this aware of the outside criticisms, there’s a freeing nature to how the show can proceed to weave action, sorrow, and comedy with ease.

The Doom Patrol can best be described as meta-humans with powers less-suited for crime-fighting. Larry Trainor was a military pilot who had an accident that transformed into Negative Man, crippled with radiation that affects those around him and only kept alive by a spirit of energy he cannot control. Rita Farr was once a rising actress but a mysterious accident led to her becoming the Elasti-Girl, though not in full control of the elasticity of her skin, often melting when growing distress. Crazy Jane has over 50 personalities and each one of them has a different superpower, neither of which she can call on in certain situations. Cliff Steele was once a top racecar driver but an accident left him dead, only to be revived in a rusty robot body, known in the comics as Robotman. All of them are taken in by the research professor Niles Caulder, trying to fix these damaged people. That work is halted, however, when the sinister Mr. Nobody captures him and takes him to the mysterious white void.

There’s a lot present within this formula to mimic the likes of X-Men and Umbrella Academy but also a lot to distance itself as well. The first season has a lot of breathing room with 16 episodes where there’s plenty of time to explore the characters who are damaged far more than just physically. Larry had a wife and two kids but was also secretly gay during his marriage, trying to conceal his disgust with himself for not being truthful. Having left everyone behind, he is still haunted by the past that he must come to terms with, from being open about his sexuality to making amends with the few who remain alive. Rita naturally has a diva complex but also a shame for her past. Cliff was an awful father and husband, leading to him bitterly lashing out with his catchphrase quite possibly just a string of expletives. And Jane, well, Jane is her own series entirely given how many personalities she has to contend with.

The writing here is exceptional considering there’s a great balance between hard tragedy and cynical humor. The show doesn’t shy away from the drama of these characters which cuts rather deep at times but also balances it for such players that have remained alive and contemplative for years. They’ve seen a lot of weird stuff to be used to most of it, thus forcing the stories to up the ante in the surreal aspects. Consider how the majority of the season finds them venturing into a donkey’s butt, visiting a sentient street, and trying to stop a giant eyeball in the sky from erasing human existence.

Aiding the humor is the season villain of Mr. Nobody, portrayed in an over-the-top manner by Alan Tudyk. He’s written to be a knowing meta villain, often chiming in to mock the meandering character arcs or complain about being the best thing to ever hit DC Universe (the streaming service the show premiered on before moving to HBO Max). Mr. Nobody not only proves to be a cunning villain with his interdimensional warping of time and space but choosing just the right moment to break the fourth wall.

It’s a bit hard to articulate just what makes this show so wonderful in its first foray of 16 glorious episodes. Let’s put it this way: The final episode’s climax hinges on a giant cockroach and rat making out. If that doesn’t intrigue you as to how such a show gets to this point, I don’t know what will.