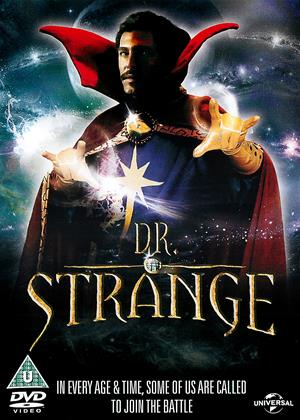 Ignore that hastily-typed synopsis written by somebody with poor literacy skills who hasn't seen the movie. This is a made-for-TV pilot which didn't lead to a series, and that should tell you rather a lot. Its main problem, apart from the painfully low budget, is that it's a superhero origin story in which the hero doesn't have the slightest idea what's going on until halfway through the film, and doesn't really get the hang of it until the last few minutes. I suspect the main reason for this was that special effects cost money, and the scriptwriters were under strict orders not to include too much magic in a story which was supposed to be entirely about magic. For example, as in the comic, Doctor Strange's love interest is called Clea. In the comic, she's a platinum blonde magic space pixie from the Dark Dimension who wears psychedelic tights and her dad rules several universes and his head's on fire. In this film, she's a normal human being who needs to be rescued. Which neatly sums up what's wrong with the entire movie.

That, and the abysmal acting of almost everyone involved. John Mills as the Ancient One (Tilda Swinton isn't the first non-Chinese actor to play him!) is the honorable exception, but even he gives an unenthusiastic performance which implies he knows it's a load of tosh but he needs the money. Some bloke you've never heard of is painfully wooden as the hero who doesn't really do all that much until very late in the film, and in the opposite corner, we get King Arthur's evil half-sister played by an actress who would probably have eaten the scenery if there was more of it (the Dark Dimension looks about the size of my living-room), some sort of luminous muppet, and a couple of demons whose costumes are so cheap we don't get a proper look at them. Even Doctor Strange's origin story, which constitutes most of the plot, is greatly changed so that they don't have to bother going to expensive locations like Nepal. Watch last year's remake instead - sometimes more really is better.