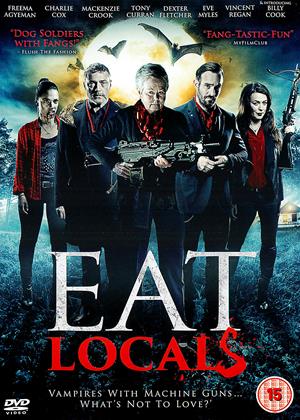 It' a well made British film with some familiar faces and some new ones. It's a good twist on a vampire story with some funny moments. I thought Danny king was very good in the film and without him I think it would have lacked a lot. I would like to see more from Danny. Is it the sort of film you could watch a second time in a year or so...yes. Is it action packed Americana, no.

Cinematography and sound were good and it was an original story. If they made an Eat Locals 2 I would certainly watch it.

This is film is great fun, with plenty of gore in a good way and it is outrageously funny throughout. A really well made British film with great acting. It is good fun with good acting and worth watching

This film was rather flat. The characters are dull and uninteresting. The film struggles to find a balance between comedy and horror and ends up being bad at both. Seems like a poor attempt at making a british what we do in the shadows.

This is a dreadful British alleged comedy horror. A silly pc box-ticker of a film. And deeply old-fashioned. It seems to run out of steam too, hence the tacked on ending (no spoilers). It thinks it is clever and fun. It isn't. It is painful.

The script is like a bad first draft by a disaffected sixth-former complete with preachy rants about Thatcher and how migrants and mass immigrations is simply marvellous for Britain. Often it is nonsensical and the jokes are not funny - they have have seemed so down the pub. It is that sort of film - the story you make up with mates when drunk down the pub. It should have stayed there.

Not funny, not scary, not anything - just a vanity project directed by a posh privileged ex-public schoolboy with excellent connections from his acting film career - why he persuaded so many British character actors who should know better to partake. He even got his mate Jamie Oliver to do the catering. Bless.

Welsh actresses Ruth Jones and Eva Myles are in it, looking very similar so like BEFORE and AFTER photos for some dieting club advert.

Dexter Fletcher also pops up - around the same time he took over directing Bohemian Rhapsody/. Well I suppose one good decision of two is OK.

Mackenzie Crook phones it in, barely bothering to act at all. And Anne Crosbie from One Foot in the Grave appears, plus some BAME actor box-tickers.

The director has a good contact book - far better than the truly dreadful derivative annoying boring nonsensical film he made then.

This movie is all based around a remote farmhouse where the army is somehow aware of a gang of vampires hanging out there. There are some laughs but I got bored halfway through and it was all very predictable

If you like vampire type shows such as True Blood or perhaps a fan of Twilight then you will be sorely disappointed. I felt the storyline was lacking in any sort of depth as were the characters.