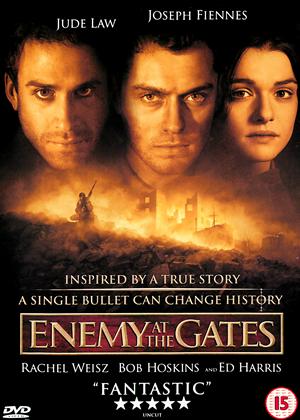 Synopsis:
It's 1942 and the German and Russian armies are embroiled in one of the most momentous battles of WW2, the Battle of Stalingrad. Defeat at Stalingrad could hand Germany victory in Europe and Stalin has sent Kruschcv (Bob Hoskins) to personally oversee the city's defence. In another corner of the city Danilov (Joseph Fienncs), a political officer, encounters Vassili Zaitsev (Jude Law), a simple soldier from the Urals who possesses an extraordinary skill, he is a first-class shot with an iron will. Danilov realises that Zaitsev could be moulded into exactly what Kruschev needs in order to boost troop morale.
Zaitsev joins a sniper unit and his dangerous missions are chronicled and embellished upon by Danilov and before long a hero is born. But while Zaitsev's glory rejuvenates others, Danilov becomes jealous of the man he created when they both fall in love with Tania (Rachel Weisz), a courageous comrade fighting in the ranks alongside them. Eager to break the Russians' new found resistance the Germans draft in Major Konig (Ed Harris), their own celebrated sniper. As the battle wages on, these two lethal sharpshooters engage in their own personal deadly duel, stalking each other amongst the rubble of the symbolic city of Stalingrad.
Actors:
Jude Law, Ed Harris, Joseph Fiennes, Rachel Weisz, Bob Hoskins, Ron Perlman, Eva Mattes, Gabriel Thomson, Matthias Habich, Sophie Rois, Ivan Shvedoff, Mario Bandi, Hans Martin Stier, Clemens Schick, Mikhail Matveev, Alexander Schwan, Lenn Kudrjawizki, Hendrik Arnst, Claudius Freyer, Dietmar Nieder
Directors:
Jean-Jacques Annaud
Voiced By:
Eddy Joseph
Narrated By:
Martin Glyn Murray
Writers:
Jean-Jacques Annaud, Alain Godard
Studio:
20th Century Fox
Genres:
Drama

Reviews (2) of Enemy at the Gates

I like this film very much. Yes, I know it's a drama, yes, I know that history is twisted for dramatic purposes and the characterisation is flawed, but nonetheless I like it. Whether historical or not, from the opening sequences it gives a flavour of the brutality of war.

The title 'Enemy At The Gates' is taken from William Craig's 1973 history 'Enemy At The Gates - The Battle For Stalingrad' and the central character Vasily Zaitsev was a real person - see his entry in Wikipedia. Just a quote from the intro to that article:

"Vasily Grigoryevich Zaytsev (23 March 1915 – 15 December 1991) was a Soviet sniper during World War II, notable particularly for his activities between 10 November and 17 December 1942, during the Battle of Stalingrad; during this five-week period he killed 225 soldiers and officers of the Wehrmacht and other Axis armies, including 11 enemy snipers."

The story of Vasily Zaitsev's (Jude Law) exploits at Stalingrad, together with the other characters, appears as a sub-story in William Craig's book. The surrounding story of the film is, of course, dramatic licence, as is the characterisation of Krushchev (Bob Hoskins). the political commissar (Joseph Fiennes) and the love interest Tania Chernova (Rachel Weisz). The German sniper, Major Köning, is well played by the always excellent Ed Harris.

I have read Antony Beevor's (very readable) 1998 history 'Stalingrad', I am currently reading William Craig's history, I have seen 'Cross Of Iron', I have seen Joseph Vilsmaier's 1993 German film 'Stalingrad', I have seen the episode on 'The World At War' that dealt with the battle of Stalingrad and - and having learned a little of the reality of one of the bloodiest battles in history with up to 2 million deaths, I still like this drama. Yes, everyone speaks British English, yes, it has of course been tarted up to make a (mostly) coherent film script, but it conveys well the atmosphere of a ruined city and the squalor and misery of conflict.

This film focuses on the central character who is a sniper for the Russian army during the German's siege of Stalingrad. The film is very well made and encapsulates how horrible it must have been in the city at that time. The film is very atmospheric and keeps the viewer on the edge of their seat throughout. I am a big fan of war films and would place this one up there with the best, having a new perspective to offer the viewer on the depravity of war.

The first level of the Russian campaign in the video game 'Call of Duty' is based on the opening scenes of this film.

Over all this film is very atmospheric, different and well acted. Well worth a watch.