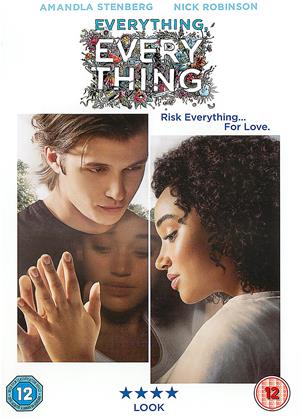 Everything, Everything review by Mark McPherson - Cinema Paradiso

After having endured a handful of these Bubble Boy teen romance pictures, I have finally arrived at the movie which could easily have been dubbed Bubble Girl. I could view such a scenario as a display of how lazy this genre has become, but I found myself refreshed with the movie’s boldness. It gets the clunky material of 18-year-old Maddy’s disease that prevents her from leaving her sterile house out of the way quickly so it can proceed quickly to her relationship with the boy next door. Okay, this is a melodramatic story that’s been done before, but it’s base enough to give the actors room to focus on character rather than the specifics of Maddy’s condition.

The leads are likable enough with Amandla Stenberg playing the plucky Maddy and her love interest of the loner teen Olly, played by a charming enough Nick Robinson. We know enough about them to find them just as adorable as they do each other. Maddy spends her days reading books, writing reviews of said books, watching movies and building architecture models. Olly likes to wear black and thinks of himself as a little dark, even though he puts on the most playful of displays with a bunt cake. Given Maddy’s safety-obsessed mother, a visit from Olly is out of the question, leading to them meeting each other more through texts. Their texted conversations, however, play out in Maddy’s head where the two can meet in one of Maddy’s wonderful models. It’s not exactly high concept, but it’s a merciful dash of visual flair to a form of communication that is usually only portrayed by floating bubbles and windows.

I was surprised by how gentle and easygoing this romance formed, devoid of most of the annoying cliches and pointless conversations. But when Maddy and Olly finally occupy the same room, they have nothing to do. Sure, they make a great couple, but where do they go from here? Form a bond that will develop over the years into a tender romance? Nope, the movie doesn’t have time for that and wants these teens to enjoy themselves now. Maddy mentions she wants to go see the ocean and that could make for a great escape to the beach. But, no, that’s not daring and secluded enough. They must acquire a credit card and run away to Hawaii so that nobody can disturb their private time to fall in love with each other.

I don’t want to disturb them, but they sure are disturbing me with their lovey-dovey nature that quickly runs out of interesting things for them to say or do. They start the movie off talking about each other and what they find fascinating about each other, only to end the picture with bland “I love you” banter in between their kissing. While I do like seeing these two actors on screen, there comes a point in the movie where it felt as though they should be left alone. By the time they make it to Hawaii, there’s nothing left to explore. Maddy could show off some more of her book smarts and Olly could open up about his alcoholic father, but no such luck here. The movie seems much more content watching these pick out bathing suits, swim in the ocean and share a bedroom for the night. There’s an awkwardness to these scenes as if the characters are trying to signal for us to leave them alone.

And, oh, how I wanted the movie to end to save itself. The movie had been pleasant enough not to be daunting, stupid or soapy, only to result in a third act that goes down in flames. There’s a big twist about Maddy’s condition which would normally send me into a rage for being so immoral and left-field, but I’ve become numb to this sort of stupidity that I took it almost as an admission of guilt that this story has no clue what it’s doing. Maddy’s extensive knowledge of books and architecture never really come into play and Olly remains more aloof than he should be as the vanilla boyfriend every teenager girl desires. Even the creative visuals of Maddy’s imagination driven texts outstay their welcome. I wanted to let this sappy teen melodrama pass me by with its gentle pace and extremely light moments of wonder, but it becomes so passive and dull with its lovable leads that I wanted to shout at the scream for them to do or something interesting. I was very tempted, but I just can’t bring myself to get all that worked up over a forgettable teen romance. And with such a boring title, it shouldn’t be too hard to expunge from the mind.