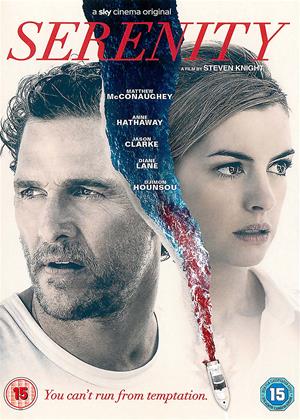 Oh, the many goofy twists that make a bad movie so deliciously absurd. M. Night has given us plenty of left-field third-acts to baffle the mind and make a somewhat mediocre film a memorable mess. But, wow, does Serenity put these laughable twists to shame with a story so surreal and incoherently misfiring its remarkable. It’s a bad movie so unusually constructed that it’s impossible to divulge its insanity without going into spoilers, so fair warning.

Matthew McConaughey plays Baker Dill, a fisherman who has a real Moby Dick thing going on with the sea. He resides at a Florida port where he has spent far too much money with the one purpose of catching an elusive giant tuna. When he’s not scowling at the sea for his many failed attempts to bring in the creature, he’s jumping into bed with women while goofy pirate music New Orleans music blasts on the radio. One such woman is his ex-wife, Karen (Anne Hathaway), who has come begging that Baker do something about her new husband, Frank (Jason Clarke), being too violent with their son, Patrick (Rafael Sayegh). Karen speaks about how Patrick is talented but has isolated himself in his room programing a video game. Dill can’t be bothered; he’s too busy hunting that fish.

It doesn’t take long for the audience to catch on that something isn’t right here. Dill’s world is weirdly assembled, where he has sex with Diane Lane in what seems like something out of an absurd adventure film and taking shipmates like Djimon Hounsou who speaks to him in odd dialogue about what emotions feel like. All of this may seem like the film is stumbling but it launches itself off the rails about halfway through when the grand twist is revealed; Dill is inside a computer game. No, seriously, this is the twist of the film. McConaughey is trapped in a video game assembled by Patrick that is more or less being used as a coping mechanism for the kid to defend himself and go kill his stepdad. If all of this sounds absolutely bonkers...well, that’s because it is.

It’s rare to see a film such as this become so lost in its staging that it loses sight of all reality and meaning. McConaughey doesn’t come to some greater understanding of the futility of existence when locked in a singular motive, nor does Patrick learn some meaningful lesson in his stewing of staging. All sorts of horrible messages can be taken away from such an aimless production. For example, I could easily see some conservative nut using this as an example of how video games are a leading cause of violence. McConaughey being tagged as a tragic hero could lead one to believe his sexual veracity and eagerness to kill are warranted of a man who stands up for himself in the film’s weird way of asserting over the odds. Those two ideas clash greatly and you can see how both are deeply flawed.

One might think I’m looking too deep into this film with this kind of examination but what choice do I have? The film offers nothing more than the twist of McConaughey being trapped in Tron: Florida Expansion Pack. The sex scenes are more goofy than sensual, the quest on a boat is more dry than manly, and the very premise of murder is delivered so bluntly it’s hard not to laugh at such dim-witted dialogue. If only the kid programming this movie/game could’ve found a better twist besides the meta approach to surprise an audience in the most insulting way possible.