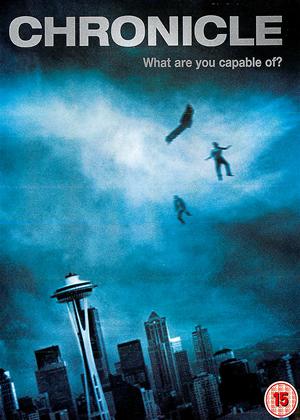 A surprise discovery causes a group of high school boys to develop super powers including telepathy and the ability to fly. Though at first their new found powers bring the three unlikely friends closer together their lives soon begin to spin out of control; as they push their powers to their limits, endangering both their lives and the lives of those around them.

Filmed almost entirely in that horrible, shaky, hand held first person camera fashion that seems to be oh-so-popular and oh-so-over-done at the minute Chronicle follows Matt, Andrew and Steve as they test and develop their new powers in only the way a couple of teenage boys would, by messing with other people’s cars, confusing the general public and making girls flash their knickers. Unsurprisingly things take a turn for the worst fairly quickly however, although it was only with hindsight that this descent becomes apparent quite so early on; this aspect of the movie, at least, was handled with a reasonable amount of subtly and intrigue.

I must also grudgingly admit that the direction the movie’s narrative took was a bit of a surprise at first: the hero of the piece is somewhat misleading for the first quarter of the movie, causing you to develop almost protective feelings for the boy who turns out to be the villain, whilst the inclusion of the “popular kids” who are actually decent people rather than narrative vessels to provide the protagonist with a revenge plot to follow, is somewhat of a change from the norm.

Otherwise however, Chronicle is just fairly mediocre; the acting is satisfactory and it’s full of the rather tepid teenage angst we have come to expect of our Hollywood movies, beyond that the movie left very little impression whatsoever.