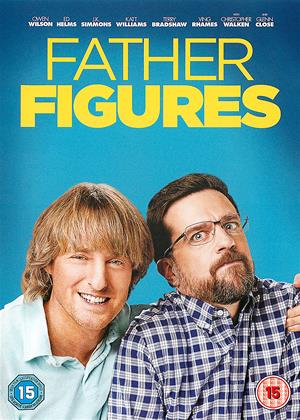 This movie wouldn't have been *too* bad if every sentence uttered did not include an expletive! Why do writers and producers think that a film will be appealing to the young, hip and trendy generation if and only if there is excessive use of *really* foul language? Seeing accomplished actors speak such needless filth was cringe-worthy!

Loser by a nose - Father Figures review by NC

Am sure Owen's nose has been altered to make it more bizarre. With the trendy half beard fuzz, rhe looks a bit of a mess.

Father Figures (aka Bastards / Who's Your Daddy?) review by Mark McPherson - Cinema Paradiso

I really wish I could give a film like Father Figures the benefit of the doubt. There are a few hints of a deeper film, meant to be more meaningful about two brothers on a road trip to track down their true father. And there are a few hints that director Lawrence Sher attempts to weave some genuine humanity into this comedy. Of course, you’ll have to peer deeply through the thick of haze of gross-out gags and it’s not at all easy, especially when trying to deal with a scene of Owen Wilson vindictively urinating on a little kid.

Owen Wilson and Ed Helms play odd brothers of cartoonish traits that must come printed on their bios, shipped into this picture as ordered. Wilson is naturally the free-spirited dimwit with all the luck and lots of sex while Ed Helms is the neurotic divorced husband with little luck and no sex. Their mother is played by Glenn Close and finally reveals to the two that she doesn’t know who their true father is. Thus begins a trip to many celebrity cameos to find the right cartoonish dad they need to find for closure.

Despite a great cast, the cameos all come off as lukewarm caricatures. Terry Bradshaw plays himself as the dopey football player who believes Wilson and Helms far too easily. JK Simmons deceives them as a white trash criminal, giving that say same snarky performance he always delivers. Jack McGee plays a foul-mouthed police officer who puts on that iconic grump face and gruff voice for a family event gone awry. And Christopher Walken kinda does his subtle bit in his twilight years, this time playing a veterinarian, giving me an uncomfortable deja vu of his roll in this confounding cat comedy Nine Lives.

I expected Father Figures to be a low-brow comedy but what’s most confounding is how it tries to take a more dramatic approach to the somber reveal of dear old dad. I’m sure it was intended as a good mix of comedy and drama but it just comes off as the most awkward of juxtaposition. For example, Helms will at one point meet a woman, June Squibb, at the bar and hit it off rather well. There’s a tenderness with him and June and some brotherly bonding when he meets up with Wilson the next morning. But we know it won’t last. I doubt it’s a spoiler if I mention that the woman turns out to be someone who may or may not be his sister. Whether she is or not doesn’t matter; it still makes Ed Helms feel awkward and yucky, per the film’s Helms requirement.

I really wish I could applaud a film like Father Figures for trying to be more than just raunch but all it comes off as is raunch with a side order of undeserved melodrama. And, wow, does it taste terrible for venturing off the path of gags and grossness, where we’re meant to feel a tragic sense of loss amid visual jokes of big-balled cats and in-car masturbation. Imagine if There’s Something About Married tried to take a more somber route with caring for the mentally disabled or that Bad Santa took a serious look at mall thievery. That type of focus holds no water in a film where Ving Rhames talks explicity about what women can do with a penis.