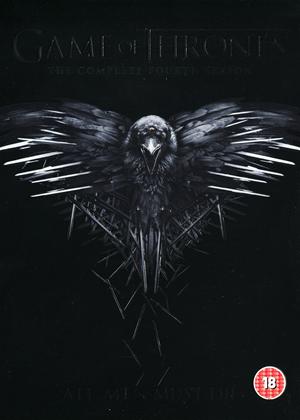 Reviews (3) of Game of Thrones: Series 4

I came late to watching 'Game of Thrones' and overdosed on the box sets of Seasons 1, 2 and 3 one after the other. I didn't watch any of Season 4 on TV and deliberately waited for the set on disc so that I could immerse myself again. And I have [although, perhaps as it's just been released (February 2015) there were gaps of a few days between mailings from Cinema Paradiso to receive the complete set] - the same format as before of 10 x (approx) 1 hour episodes. So, does it continue the high standard of the earlier seasons?

Well, it's more of the same - same / similar characters (there are of necessity a few new ones, previously ones having been bumped off), same plotting, double crossing and treachery, same nudity and bogus sex scenes, same f-ing and blinding. And of course the same fine variety of slaughtering, stabbing, axing, poisoning, flaying, burning, head crushing, general dismemberment and other assorted killings.

Much as in season 2 which had a mighty battle in episode 9, there's a rather good one here - also in episode 9. And episode 10 has a few surprises as old scores are settled, surplus characters bumped off, and (of course) ending on an intriguing hook for the next season.

However, some of the early episodes are more like a costume soap opera than medieval fantasy and the dialogue is simplistic and frankly, poor. The quality between episodes varies from below average to really excellent - given the high standard that went before, it must be difficult to keep it up.

The detail is amazing, the photography and special effects excellent, the production values high, the acting generally good and the storyline epic - overlong perhaps, but then so is the series of books. I enjoyed it, but this time there are a few weaknesses on show. If you enjoy epic medieval fantasy you should continue to enjoy it - there's yet more to come and I trust it's not running out of steam. Let's hope it doesn't degenerate into a simplistic, if adult, fairy tale...

game of thrones - Game of Thrones: Series 4 review by CC

I was aware of the success of Game of Thrones and looked forward to seeing the first disc. I found the ubridled violence distasteful. Where was the artistry? What made this so popular? I will continue with the next disc to see if my judgement is hasty. If not, I will return the disc and not venture further into this saga.

Theres a turn around for the books! - Game of Thrones: Series 4 review by CP Customer

Well... As the seasons go by they keep getting more and more exciting and surprising! The strong fall and the weak rise... Or do they?

If you think season 3 was good then this is better. Will the North Wall fall or stay strong as it did hundreds of years previously? Will the Stark name live on? And will our loveable Tyrion Lannister live to tell the tail of who wins the Iron Throne?

We all hate Joffrey Baratheon and want to see him dead... But will he change for the better or get his just deserts? All will be told in The Game Of Throne Season-4!