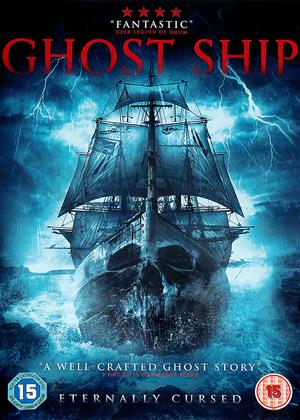 Synopsis:
When Josh takes on a job as tour guide of a 19th century ship he has no idea that a woman who died at sea centuries ago has been waiting in its shadows for her lover to return. He begins to see images of a beautiful woman and believes the ship is communicating with him but it quickly turns to horror as he is haunted by a strange, ghostly apparition. She believes Josh is her lost love and tries to claim him for herself, putting Josh and any woman close to him, in mortal danger.
Actors:
Charlotte Badham, Josie Connor, Kevin Horsham, Fawn James, Kevin Johnson, James Kennan, Sheena May, Edward Mitchell, Lewis Peek, Patrick Romer, Michael Sani, Joseph Sentance, Lizzie Stables, Robyn Steyn, Louisa Wilde, Kate Young
Directors:
Robert Young
Producers:
Stephen Cranny, Hugh Janes, Robert Young
Writers:
Hugh Janes
Aka:
Curse of the Phoenix
Studio:
High Fliers Video Distribution
Genres:
British Films, Horror
Countries:
UK

This film is the worst film I have rented. Extremely poor acting. Poor storyline. Had to turn off after 30 mins it is that bad. My advice is avoid and pick something else.

My first instinct going into Ghost Ship (2014) was that it probably was a cheap rip-off of 2002’s horror film of the same name. This isn’t the case however, since the 2014’s version does not bear any resemblance whatsoever to the previously mentioned film both in terms of genre and plot. With that being said, is Ghost Ship actually a good film? Here’s where it gets tricky.

The film follows an unsuspecting protagonist Samantha (played by Jennifer Stuckart) aboard a ship that goes awry. And this going awry is a little tricky to explain without spoiling the whole film. But I will do it anyway, so you’ve been warned.

Samantha is a no-nonsense girl who’s used to getting it done her own way. To great credit of the filmmakers, she’s also an intelligent girl that finds herself in very unusual circumstances – some of which very unpleasant to say the least. And so, the boat comes alive (take that as you will) and urges Samantha to accept the truth in regards to the deaths of her family years ago. The boat does this by separating her from the only person on the boat, which is her boyfriend Mark (played by Brian Rife). And here’s where the film stars feeling more episodic than looking like an actual film.

From here thereon, the boat instructs Samantha to do some “nasty” things to herself, while boyfriend Mark pleads for her to stop and listen. And this goes on and on, until it becomes washed up just like the boat the two reside in. And the boat is also continuously overpowering Samantha’s willpower, urging her to do some bad things to herself (which I will not disclose). Rinse, repeat.

And therein lays the major problem with the film: Ghost Ship just doesn’t have that sense of urgency that would make you want to see how things would unravel. Here director and writer Matt Lofgren could’ve salvaged the piece by interjecting genuine moments of internal terror (regarding the realizations as per the script), but unfortunately – he doesn’t do it. Instead, we’re stuck with Samantha on the ship’s insides, and Mark on the outside. And this goes on for a while, but it just isn’t enough to lift this film out from the tediousness of its own weight.

As for the horror aspects of the film, they are spread unevenly throughout and don’t make for any genuine scares, or dread. Ghost Ship is tagged as a horror film, but there are YouTube video fan-fictions scarier than this piece of cinema (if you can call it that), so there goes that part of the movie.

All things considered, watch this ONLY if you’re drunk, very bored, or very, very drunk – particularly in that order.