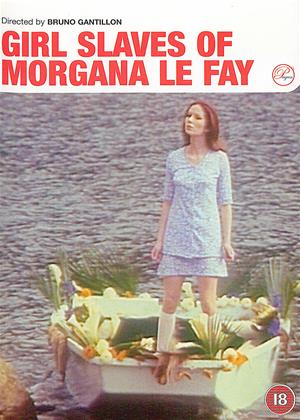 Rent other films like Girl Slaves of Morgana Le Faye

A ‘neglected Eurotrash classic’ apparently, this beautifully filmed French film has been compared to the works of Director Jean Rollin. To be honest, that is my main reason for watching. There are certain similarities – beautiful, scantily clad girls, luscious countryside, an elegant, crumbling castle and various softcore lesbian scenes.

However, whereas Rollin was always able to inject a certain indefinable fairy-tale quality into many of his works, ‘Girl Slaves’ falls into a trap Rollin never did, in my view – this film is sadly rather dull. Not a great deal happens, and when it does, it happens very slowly.

Thankfully, there is a strong cast here, bolstered by Alfred Baillou as the diminutive Gurth (Baillou appeared in a number of films for Jess Franco, his best known probably being Malou in ‘Plaisir à trois’, or ‘How to Seduce a Virgin.’).

Dreamlike it is, but there is little beneath the surface except for a fairly gentle tale involving lesbian exploitation. Nicely directed by Bruno Gantillon, but with little meat on the bone. My score is 5 out of 10.