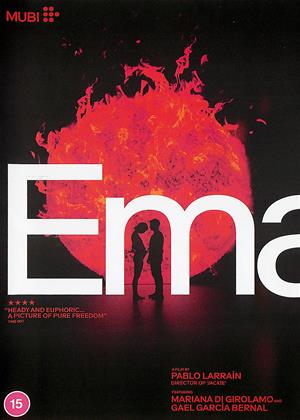 The premise is that Gaston, a choreographer, and Ema, his much younger wife, a school dance instructor, have adopted a child but gave him back to the adoption agency because they couldn’t cope with his delinquent behaviour – in particular, his fire-setting. The boy (named Polo, by now about 10 years old) started a blaze that left Ema’s sister permanently disfigured. The couple seem to regret giving him up but blame each other for the chain of events that led to it happening.

If so far it sounds like a Mike Leigh tragedy or a slice of Dardennes Brothers social realism, think again – what follows is more a celebration of decadence and transgression, sort of Pedro Almodovar meets Gaspar Noé. Ema has an affair with a married firefighter and encourages Gaston to sleep with one of her friends – not very shocking or perverse behaviour in itself perhaps, since their marriage has irretrievably broken down. As if that’s not enough, she gets sexually involved with an older female attorney – maybe because she’s broke and is hoping the other woman will take on her divorce case gratis . . . or maybe just because she can. And then a bit later she’s at a house party with her five reggaeton friends, they all strip naked and make out with each other . . . and, far be it from me to accuse the film-makers of inserting a gratuitous lesbian scene just so they’d have some salacious imagery to show in the trailer reel - I’m sure there was a sound artistic justification for it but I’m just too thick to see it. (There’s no male-on-male action, in case you’re wondering).

Mariana Di Girolamo gives an accomplished performance as Ema, a borderline sociopath who has a great lust for life but a weird emotional detachment from people and situations (and is a pyromaniac to boot). Almost every scene is visually rewarding, whether we’re at the harbour side, a halogen-infused city street at night, or a decaying basketball court, and the outdoor reggaeton dance scenes are particularly inspiring.

But aside from being a celebration of hedonism, what is this film really about? I would hardly call it feminist or anti-authoritarian – in Ema’s world, male power and authority seem to have evaporated anyway. Once or twice the film seems to be trying to make a point about class or racial privilege – one of Gaston’s students calls him out as a “tourist” who doesn’t understand the culture of the blue-collar waterfront district, and it’s surely significant that Polo is a dark-skinned mestizo boy who’s been adopted by a very white couple. But if it’s meant to be skewering self-indulgent white hipster culture then its impact is blunted when for most of its running time it seems to be endorsing that sort of lifestyle and mentality.

I felt a little soiled by the film’s seemingly amoral world-view and would be tentative about recommending it to any of my cinephile friends, on account of the shortage of likeable characters and lack of emotional chemistry between the main protagonists. But it has a nifty ending and I enjoyed it enough to want to re-watch at least parts of it. Perhaps in classifying this film as amoral I’m missing the point – when all’s said and done, if Chilean society is going to hell in a handcart anyway, maybe the only rational response is to grab the sleekest handcart, paint go-faster stripes on it and enjoy the ride.

An excellent review by WS, so I won't repeat the points made there.

This film had a very sycophantic review in Sight & Sound magazine, but I feel much more ambivalent about it. The best bits were the set piece dance scenes, which benefit from stunning settings and fine choreography.

Any emotional impact is undermined by the robotic performance of Ema herself, a detached sensibility that is undoubtedly intentional on the part of the director. The whole narrative feels contrived and overheated (pun on arson and pyromania intended). Every action is po-faced and crammed with cynical motivation.

It's hard to care about anyone in this portentous, humourless film.

Quite apart from the tedium  of watching this confused narrative, which wandered all over the place without any real coherence for the watcher, one cannot help but think that this a pretentious, self-absorbed film by its director.

Fantastic cinematography and fantastic dance choreography, accompanied with stunning Santiago locations cannot bring this film to life. A very interesting story is lost due to some very frustrating decisions by the director to fragment the story and keep the narrative largely cloaked. It was an unwelcome distraction to try and put the pieces together in what would have been a relatively straight-forward yet very interesting story. A misfire for Larrain this time. I've only seen Larrain's Jackie and that's magnificent. I'm going to watch No and Neruda this director has certainly got me intrigued. More story with your beautiful visuals next time - I wish he'd had more faith in his material to let the tale be told straight.