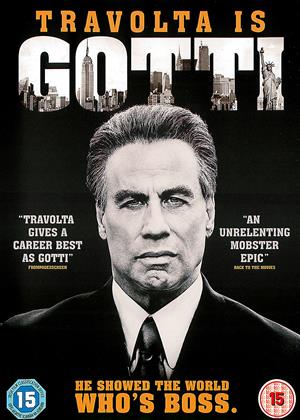 John should do comedy now? - Gotti review by NC

De Niro has done the hard nut stuff, and now does some lighter works. I like Travolta. Wild Hogs was good fun. This is just boring. We get the mafia thing, we get the ba da bing ba da bing thing. Godfather, Untouchables, and Goodfellas did it all. To go there again there has to be something new, or at least well done. Warren did all this in Bugsy.........1991!

Based on a true story , this should have been as engaging as the many other mobster films, but it isn't! Disjointed, surprisingly low key too often, gloomy cinematics, lack of screen presence amongst some of the cast. Just about watchable,

This had most of the elements of a very good film but it's pretentious structure spoiled it. Travolta was good - as an actor but not a director. Bring back chronological order!

The film is well acted and John Travolta swaggers through the main role brilliantly. It is an interesting factual based story with enough menace and tense aggressive action to please.

2 stars as John T actually physically resembles the character he is playing. But that's it. I'm a fan of "underworld" movies: Godfather etc. sadly Gotti comes across as a mess of a story: just a series of apparently unrelated set pieces with little or no character development, left me sitting looking at my watch wondering how much longer I had to endure. Not recommended.

The first things I heard about Gotti were all negative. The critical pile-on, with many reviewers proclaiming it to be one of the worst films ever made; the 0% score on Rotten Tomatoes and the connected fall-out. To me this was quite strange, because unlike a film like Dirty Grandpa (which got bad reviews and with good reason,) there was almost nothing in the story which would warrant that kind of derision. And notable film critics like Mark Kermode have acknowledged that there is this kind of perceived action by them, even though he disagrees with it.

But I was curious to see what the fuss was about, so I rented Gotti and watched it with a friend of mine, who also like me has strong opinions on films and doesn't appreciate rubbish. And by the end of it, we both had the same reaction: to say that this is one of the worst films ever made is idiotic. It absolutely is not. You can lament the fact that it is in many ways a copy of Goodfellas and doesn't do anything new with the genre, or that if it had been made when Joe Pesci was the lead and Scorsese was muted to direct, the result would have been quite different.

But this is a solid 3 star film, which was never boring, with a cast who were absolutely committed to what they were doing. I thought Travolta was really good as Gotti and from a behind-the-scenes viewpoint, he poured vast amounts of his own money into the project, such was his belief in it. His real-life wife Kelly Preston played his on screen wife, and the chemistry was great between them.

There was plenty wrong with the film, I don't shy away from saying that, but nothing which warranted the reaction it got. For me the most unedifying point was the end credits, where news footage was played with people lamenting the passing of what was a violent and nasty man who caused huge problems and carnage in his community.

The fairest thing I can say about this film is that it is great for a Friday night, when you get a takeaway and want to watch something which doesn't require too much attention, has some laughs, then at the end you think "Yeah, that was worth a look."

Gotti is a substandard gangster biopic that sticks out for one of the most notable attack campaigns I’ve seen for a film. Biting back from the 0% Rotten Tomato scores, online ads by the studio proclaimed that film critics put a hit out on Gotti. The ad goes on to encourage audiences to see the film for themselves and not trust trolls behind keyboards. Look, Gotti, it’s nothing personal. It’s just business.

It’s not that John Travolta doesn’t give a decent performance as the title mobster. But he’s all over the place. John Gotti begins the film by addressing the camera with cliche talk about his rise and fall. Then the movie takes the route of being a “how it all started” type story with Gotti explaining himself in prison. Then it’s a sloppy montage of music from the era and mafia, playing itself off as a watered down version of at least a dozen other true-life mobster movies you’ve seen. This makes Gotti such a distant picture in that it not only lack a consistent tone but a perspective as well.

The film seems to almost have this violent urge to shrug off improving any aspect of the biopic formula, playing everything so safe to the point of being pointless. What exactly does this film present that you couldn’t get from a published biography or a documentary on John Gotti? Nothing much. It’s as though watching the inner thoughts of a high school student reading up on the facts of Gotti while scenes from Goodfellas clouds his mind.

All that is present is mere bullet points of Gotti. Sure, John’s story is unique in that he rose up from the ranks to become an unbeatable mob boss, earning name Teflon Don. But all that comes from building up his legacy are aimless scenes of familiar mob dialogue. Again, I just can’t shake that urge of this being some bootleg adaption of previous Gotti biopics, where the director spent more time watching mob movies than studying up on the man.

The biggest crime of Gotti is that it has no teeth, only used ones borrowed from better mafia movies. Travolta never comes off as truly threatening or powerful in the film, mostly a result of a script that doesn’t do him or the figure justice. It’s all style and no content, dressing up lots of old guys in fancy gangsters suits, showcasing lots of parties and weddings, Sinatra music stirring in the background. Trying to mix it up, the soundtrack will then choose popular music of the 1980s and 1990s. It doesn’t matter if they fit within the context of the scene; they’re just added whenever. I guess you need something to tell which year the next hit or scuffle is going down on.

Gotti never goes deep into its subject, keeping nearly every aspect shallow with drama and ripe with mob movie trimmings. Am I putting a hit out on Gotti? I don’t think so; putting out a hit would encourage one to seek it out. And there are far better mob movies worth your time than this toothless stroll through cliche alley, where true mob stories are gutted into knock-off Goodfellas features.