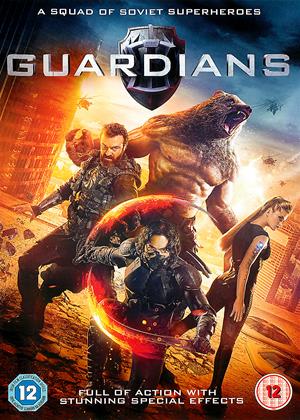 A team of superhumans has to stop a supervillain and his clone army laying waste to Moscow in this Russian reply to Marvel films. In its favour it’s not a Marvel film, it uses some interesting locations (e.g. the dry Lake Aral) and the baddie has some nifty spider-like killing machines. But, as with Marvel films, the characters are cyphers and the plentiful cgi action soon becomes repetitive. At a lean 87 minutes, at least it doesn’t outstay its welcome, but it’s all a bit rushed, scattergun and inconsequential.

There was much excitement when the trailer for Guardians went viral online. My social media exploded with everyone getting giddy for a Russian version of The Avengers with a bear instead of a Hulk. The trailer was a bombastic displaying, touting a CGI bear creature brandishing a machine gun amid a superhero collective. But I knew this level of hype. It was the same thrills of watching a really campy trailer for a SyFy original movie. And just as with those cheap movies of the week, the silliness of Guardians wears off fast.

As with any knock-off movie, be they bootleg or legit, Guardians misses the point of Marvel’s ensemble success and derives the wrong aspects of a stellar superhero film. It’s not just about the cool powers, costumes, and special effects; you need the personality to go inside those costumes. I can’t tell you a single defining personality trait of any of these Russian superheroes. I can tell you their story and powers but not much else.

Ler has the power of rocks and lives in seclusion after the experiments that contributed to his abilities to levitate computer-generated rocks and forming armor out of the resource. Ursus is the werebear who fears his powers will grow unstable and that he’ll hurt other people, so of course the government will give him a giant machine that can be mounted to his back. Khan can shift like Nightcrawler, brandishes two blades, and is dressed in a mask as though he’s a cross between a character in Final Fantasy and Mortal Kombat. Xenia is a woman of water with the ability to hide in plain sight unless of course it’s too chilly out and she freezes. The team is assembled together to tackle the threat of August Kuratov, a cyborg with electric powers that appears as though the Toxic Avenger was undergoing skin treatment. He uses his power to (what else?) take over the world with an army of clones and nukes at his command, resulting in him going to all the trouble of hauling towers across the city to act as a beacon.

Even if one were to come into this film with a Sharknado attitude, expecting the worst for a laugh, Guardians is painfully dull and cheap. The very assembly looks as though it were slapped together like a used car salesman trying to sell a knock-off vehicle, arguing it’s just as good. Sure, a CGI bear is just as good as CGI Hulk, with the exception of the bear’s budgeted special effects which never soar past sloppy TV quality. Even more unconvincing are the movements of experimental spider-like tanks that tuck, roll, and fire missiles. The fight scenes are also abundant with so much CGI staging of rocks, whips, water, explosions, and bullets that there’s rarely a moment where one can buy the excitement of a bear tearing apart a tank.

The acting is so tiresome with nobody delivering a convincing performance to sell whatever little backstory or character these players had. There’s almost a moment of sympathy when Ursus confesses his fears about turning into a bear but it’s quickly dashed. In the same way that these superhero ensembles don’t have as much time to develop the heroes, Guardians doesn’t even bother. They believe you’ll be wowed enough by Ler using a rock-made whip and Khan slicing a car in half that you won’t question why you’re supposed to care about any of this.

Guardians is way too ambitious in its visuals to grab for that sweet superhero cash that it falls apart into a heap of trash. The $5.6 million budget wasn’t nearly enough to depict an exciting battle on the Moscow skyline where jets crash and the force-fields encapsulate a tower. It’s not the least bit shocking to hear that the film was a massive bomb, dropping 90% every weekend at the Russian box office and leading a production company into bankruptcy. Maybe they should have stuck to making short films. Everyone seemed to like that bear superhero trailer far more than the movie itself.