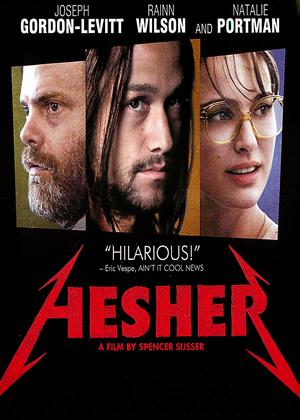 A father and son find themselves lost in grief and dysfunction after the death of their wife and mother. Despite the attempts of neighbours and extended family, nothing seems able to rouse the two from their depressive funk, until Hesher arrives.

Hesher, a long haired, under fed, chain smoking metal head with a tendency to swear a blue streak, develops a bond with the young T.J, who begins to realize that despite his personal tragedy life has a way of carrying on and not necessarily for the worse.

Starring Jason Gordon-Levitt and Natalie Portman this movie is a typical off-Hollywood indie, complete with emotional turmoil and meaningful ending, it tells a fairly familiar story with a semi-predictable ending that is interesting and emotionally engaging enough to pass for the coveted indie phrase “under rated”, unfortunately I felt that it lacked anything really different or special enough to be more than average.

The acting was perfectly acceptable, but it is rare these days to see someone who genuinely has zero acting ability on screen, and we all knew how accomplished Portman and Gordon-Levitt were already, the only surprise is that of child T.J, played by Devin Brochu, who – provided he picks his roles well – could be a name worth remembering.

Overall Hesher was a perfectly acceptable if perfectly average movie which is interesting enough to kill 106 minutes, if you’ve got them to spare.