Rent High School of the Dead: The Complete Series and Drifters of the Dead (2010) 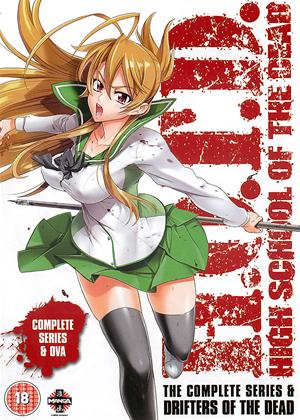 Rent other films like High School of the Dead: The Complete Series and Drifters of the Dead

Reviews of High School of the Dead: The Complete Series and Drifters of the Dead

High School of the Dead: The Complete Series and Drifters of the Dead (aka Gakuen mokushiroku: Highschool of the dead) review by Mark McPherson - Cinema Paradiso

Zomibes have become such a movie monster staple capable of different genres. Be it action (Resident Evil), comedy (Fido), romance (Aaaah, Zombies) or even straight-up horror, the zombie genre has expanded creatively in the past few years. I was entirely open to an animated series with a unique focus on high school students. Sadly, High School of the Dead fails at being a unique entity as it falls into the pit of anime stereotypes as many series have before it.

A zombie tale is only as strong as the surviving characters and that is the series' biggest problem. The cast includes the stoic hero boy, the geeky tech nerd, the quiet warrior girl, the loud tomboy and the ditzy blonde. We've seen all these characters before and seen them written much better than this. All of the female characters are present for one purpose: boob and panty shots. This is not an overstatement either. Episodes will literally stop so the camera can focus on bouncing mammaries. It may have been intended as tongue-in-cheek, but the show seems too earnest for that kind of humor. Besides, the market is already saturated with too much of this garbage to actually be considered funny. Satire or not, the fanservice outstays its welcome and quickly becomes tiresome. Mix in some rape, an underaged little girl, a pedophelic teacher, a mascot animal and you've completed the list of tired anime devices (with the exception of a giant robot which I was positive was going to pop up at some point).

It is really sad to report this as some of the action is quite good. The protagonists are attacked by zombie bikers, avoid flipping cars and fight back a zombie horde at a mansion. There is even a nuclear strike by panicking nations involved with the plot. Action-wise, the pacing is pretty fast, but in terms of horror the show is severely lacking. Kills by zombies are almost entirely regulated to biting arms with all the gore hidden by crowding zombies. Where is the tearing of the flesh? Where is the spilling intestines? Out of every form of zombie-related entertainment I've seen, High School of the Dead is painfully mild in the violence department. This was such a waste of the animation medium where you could get away with all kinds of unique kills. I guess the majority of the budget went into animating jiggling jugs.

Despite the zombie plot, there is nothing in High School of the Dead to separate itself from your run-of-the-mill, mediocre anime affair. If you're familiar with the dynamic of typical anime tropes, this is generally a paint-by-numbers show. The special beach episode only cements this point. The only people I could see digging this show are those who fantasize about cute anime girls with big boobs fighting zombies sans original script and interesting characters. For them, this title will most likely please. Everyone else will most likely view this as a mess of all the elements wrong with anime and how it can fumble almost any genre. High School of the Dead will only be remembered as 'that one zombie anime' and not 'that great zombie anime'.