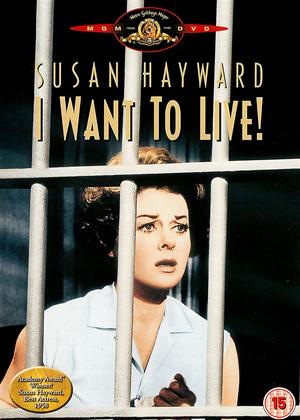 The Hayward Show. - I Want to Live! review by Steve Mason

Wise's polemical film condemning capital punishment was mounted on the real life case of Barbara Graham who was gassed in San Quentin in 1955 on unreliable evidence. The film takes great care to detail the process of the death penalty and characterises it as barbaric and legally hazardous.

Susan Hayward portrays Graham as a sociopathic criminal through many years of prostitution, burglary, perjury and jumping bail. She lies by reflex. But she is also shown as an affectionate mother and a woman who suffered excessively through others. The second half of the film details in a procedural style how Graham was steered from the verdict to her killing by the state.

This was a key performance by Susan Hayward, perhaps the great American female dramatic actor of the fifties. It's a powerful, kinetic portrayal of a charismatic, deeply flawed criminal who may well have been innocent but was certainly ill-used by a defective judicial system and the parasitic media. It was based on Graham's letters, and articles by Edward Montgomery, a Pulitzer Prize winning journalist who initially condemned her, but eventually tried to save her from capital punishment.

Wise actually puts us inside the gas chamber with Graham, trapped within the voyeuristic gaze of the press and representatives of law and order. Billy Wilder pulled up short of the death house in Double Indemnity in 1944 and re-shot the last scene, but film noir finally got there at the end of the cycle in I Want to Live!