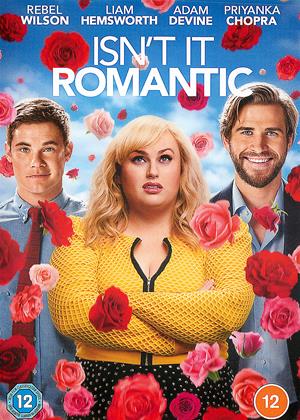 Reviews (2) of Isn't It Romantic

Rebel Wilson stars in this Rom Com about a talented architect, but has self doubts about herself and is not helped by her co workers.  Having been mugged on the street the film then turns to an extended dream sequence before everything unravels at the end.  Watchable and there were funny moments, but in the end it needed some more characterisation to get one really involved!

I loved this film - Isn't It Romantic review by MAT

When it first started I wasn't sure but once it got going I so enjoyed this film. I might even go so far as to say it was beguiling. :-)

So many nods to all the romantic comedies of the past and quite a few laughs of its own too.

If you want an easy going film for a quiet evening, this is perfect.

Isn’t It Romantic has a unique premise of questioning the structure of a romantic comedy. It plucks Rebel Wilson out of her low self-esteem funk of despising the romantic comedy formula. Having grown up soured on the genre by her mother, she is confused and astounded to discover she has awoken in a cliched world of romantic comedy trademarks. But there’s so little humor that can be extracted from such a concept that goes about the motions, mocking all the quirks along the way.

Wilson at least tries to milk as much as she can from a scrip that can barely fill 90 minutes. She plays Natalie, an architect who is so weary of New York which doesn’t hold the same movie wonderment. Having grown up with the bitterness, she can’t help but point out how inaccurate romantic comedies are to real life. Something feels off about the way this exposition is spat out. In any other comedy, there would be something to parallel the fantasy of romance in movies. Perhaps there is something amusing about critiquing cliches within cliches, the way Natalie and her co-worker continue this discussion over lunch and while in the bathroom.

To transition to the world of a whimsical romantic comedy environment, it could only a place so over the top that the world itself borders on creepy parody. Natalie smacks her head and awakens in a world where everything is now movie-presentable for a love story. The hospital she recovers in looks more like a living room straight out of a catalog. Her clothes are now fancy. Her apartment is now a gorgeous and well-lit paradise, with a gay best friend devoted to her every need. Musicals can break out at any moment with a soft pop hit and, since most romantic comedies are PG-13, all swears are covered up by some louder sound.

The fact that Natalie can recognize these structures is funny, sure, but for how long? More importantly, what does she do with this information? To maintain this film as within the genre itself, she can’t do too much deconstruction. Not when a handsome billionaire (Liam Hemsworth) is present to whisk her off her feet with rich whimsy. Of course, she won’t end up with him considering he’ll end up being a jerk. She’ll really end up with her secret admirer of a co-worker (Adam DeVine), realizing at the last minute who is right for her. How did Natalie not see this coming? Perhaps it’s because these fantasy characters bleed in from her own reality as some sort of Wizard of Oz for modern women in their 30s. Or perhaps this script is trying to remain heartfelt enough to never become postmodern.

It feels like there’s a lot to explore here within such a parody but Isn’t It Romantic hardly has enough mileage for such a concept. For what could’ve been an engrossing deconstruction of the genre only turns into mild ribbing akin to throwing some Mystery Science Theater 3000 style riffing on top of your standard rom-com. For a more clever satirization, I’d recommend They Came Together, a rom-com satire clever enough to know mere fourth-wall breaks are not the extent of mocking this genre.