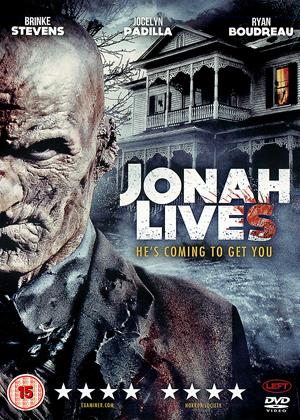 A group of teen friends meet up on a sport’s field. The two girls sit on the bench talking about sex, while the guys play sports. But enough of the character development.

“No sh*t I got sh*t,” says one later as they play cards in the basement. The girls remain bored throughout. The group aren’t as detestable as teens often are in these films, but they do their best. Scratchy voiced, horny and, whilst their wild parents are partying above, they decide to take out a Ouija board. They summon Jonah (Cesar Pereira), who was murdered before his time. We see him clambering out of a grave, looking like a fairly convincing Freddy Krueger – but rather than immediately go after whoever it was that killed him, he sets about tracking down the six teens instead.

The acting is mainly what you might expect from a very low-budget production, although the performances become more persuasive once Jonah appears. This applies to the girls especially. Jocelyn Padilla (as Barbara) is good at reacting to the devastation around her, and Nicole LaSala ensures that Lydia journeys from being by far the most annoying group member to the most interesting, via a bizarre change in character. The character of Zora is played by prolific scream queen Brinke Stevens. At first I thought her character was given such prominence because of the actress’s notoriety, but the character has her own story, revealed towards the film’s close …

Russell Estrela’s terrifically chunky electronic score is my favourite thing about this. His incidentals help cultivate the notion that this is in some way an ‘appreciation’ of 1980s slasher films. First-time director Luis Carvalho who also writes, co-produces and edits this (as well as appearing as one of the swingers) should be commended for following his dream and creating a horror film. It isn’t terribly good – many of the kills take place off-screen, and the idea that a group of young people can be slaughtered in a basement whilst their parents party upstairs is a little ridiculous (or delightfully silly, whichever way you want to look at it) – but I have seen worse. Problematically, apart from these questionable decisions, ‘Jonah Lives’ is often a rather dull experience, enlivened by a commendable upswing in pace towards the end.