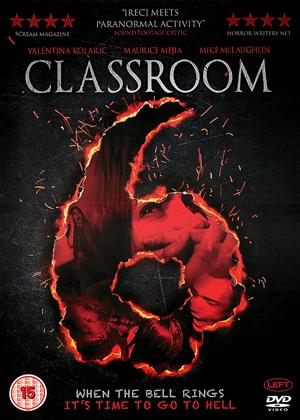 Setting a found-footage horror film in a creepy school overnight is an idea with promise. There’s something about the school arena, buzzing with life and mischief during the day, being unimaginably eerie during the night. The actors employed here are refreshingly dynamic without seeming stagey and have a naturalistic way about them. Unfortunately the seemingly improvised nature of their scenes often results in them standing around talking over each other, with little to distinguish them and little to distinguish their voices. That none of them seem to be saying much of any importance isn’t terribly reassuring.

When all cell phones suddenly run out of power at the same time their watches stop, it becomes clear we are on familiar genre territory here. The camera spluttering and the image distorting allows you to know that something frightening is about to happen, just as it has in other – frankly, better – films of this nature; but ‘something frightening’ doesn’t happen for a very long time. Just more chatting and discussing with no great onset of fear – and little (other than an omnipresent tennis ball) to get worked up about.

With a group dynamic, conflict can be an important and successful way of displaying tension. Such moments here arrive out of nowhere and are then forgotten, meaning anything built up by this dissipates almost immediately.

The finale, when loud noises and disorientation becomes all-encompassing, is effective. And yet, it isn’t terribly well done and ‘Classroom 6’ emerges more as a series of found-footage box-ticking than anything else. It genuinely saddens me to say all that because there’s a lot of love and enthusiasm that seems to have gone into director/writer Jonas Odenheimer’s project. The assorted actors give it their all, without ever the characters becoming too arrogant and dis-likeable. The end result is just not very satisfying.

Nothing new - Classroom 6 review by AL

Absolutely nothing new to add to the found footage genre. Creepy setting, small number of people, hand held footage, lame backstory, people coming to investigate, the usual ramison happenings, just nothing new and nothing of interest.

Ok acting but just not effective in being creepy or scary in the slightest.