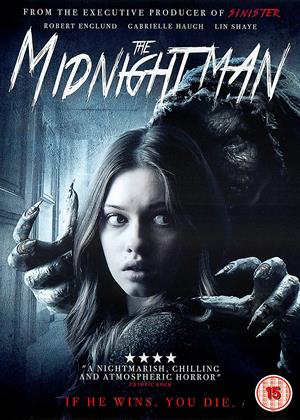 Reviews (2) of The Midnight Man

OK, Now this Could have been a Really Good Movie, the Quality of special effects was high. the Idea was pretty appealing ,but the Script just makes EVERYONE into Brainless Morons that DO exactly what you know and everyone knows you dont do ....

They stupidly Ignore any Danger and then Die. even when people have died horribly in front of them and they know exactly what to do to save ther lives they STILL do the stupid thing that gets them killed ...

And THAT alone is SO Annoying I cant bare to watch what could have been a Great Movie ever again.

The sheer Irritant the Characters in this give you might actually give you Ulcers . or at least a strong drive to Kill kill kill .....

He doesn't play by the rules ... - The Midnight Man review by NP

After an extraordinarily long list of production companies and their affiliates, we dive into a sometimes dull, sometimes very effective horror film that emerges as a kind of Nancy Drew mystery featuring some slightly bland teens and an increasingly frightening monster villain.

There’s also a very welcome turn from Robert Englund as Dr. Harding, who you are just waiting to reveal himself as the master villain. Well, he’s Freddy Krueger, isn’t he? (You’ll get no spoilers from me!)

The titular Midnight Man is an interesting creation. I loved his changing faces, signifying the horror current level of his nastiness. Apart from the occasional gore, though, I got the feeling I was watching a teen adventure rather than a horror film, despite Travis Zariwny’s suitably grim direction. My score is 6 out of 10.

Ah, yes, the old haunted game ala Bloody Mary. How many horror films spin this premise so wildly, that the young seek such thrills out of sheer curiosity and boredom, compelled to dig up the past in hopes of touching the unknown or just finding something to do. So true is the assembly of The Midnight Man, an urban legend horror that weaves its own oujia from a plethora of entries in this subgenre, echoing the past. And just as when the curious youngsters awaken the darkness, we’re reminded why films likes usually remained buried.

The story begins in 1953 where three girls play a game from 12am to 3:33am. This brings about the evil Midnight Man who feeds on their fear and murders two of the children. Skip ahead to the present and the surviving girl is now a grandmother and some teenage grandchildren who look after her. But Anna is shocked by the presence of the game she once played that claimed the two girls, the teenager and her friends grow interested. Straight out of the Jumanji playbook, they dive right in without reading the rules. And, whoops, looks like the Midnight Man is back to claim more souls. Thus begins a terrifying night of keeping candles lit and drawing protective circles on the floor.

This is a film where the gimmick is the whole premise, where the mechanics are more important than where this vehicle of a boogeyman flick is taking us. Anyone with even the slightest comprehension of this format can see exactly where all this is headed towards, to the point where even the epilogue that is meant to be a chilling continuation of the game comes off as run-of-the-mill as any the-curse-lives-on finale. And on that level, sure, Midnight Man is not too shabby. The lighting and pacing of the scares is well-crafted and bodes just the right atmosphere. But that’s about all this picture has over the lesser examples of this genre, saddling the picture with typically brazen victims snatched from the slasher genre template box and given few tweaks to be distinct. There’s little care for such figures in a game of who will survive the night, akin to a video game you don’t get to play.

The best that can be said of Midnight Man, indeed perhaps the only merit of worth, are the effects. The violence is bloody and gory, which does make a step above most low-budget horror films that fallback far more on the subtlety of their limited visuals than anything else. But unlike most low-budget horror, it does little to lift its script out of the depths of shallow figures passing through the motions of the blood and guts show, acting more as cyphers for the violence and terror. With lesser effects, this film would’ve been an absolute snooze. As it stands, it’s at least a decent showcase that the director knows how to stage some quality kills, if nothing else.