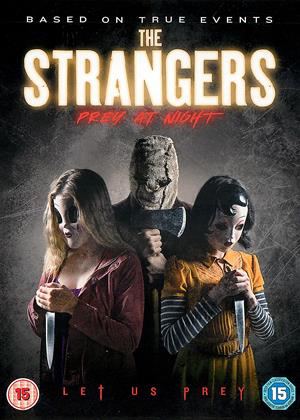 Rent other films like The Strangers: Prey at Night

Reviews (4) of The Strangers: Prey at Night

In truth this was a fairly routine chiller ( lots of blood btw) but it was well executed and given extra spice by allegedly being inspired by true events. Hope I'm not spoiling anything but I have to say the ending was a misjudged amateurish cheap shot.

A patchy thriller let down by atrocious writing - The Strangers: Prey at Night review by BG

'The Strangers' was a better-than-average stalk & slash thriller with heavy doses of home-invasion and psychological torture thrown in. Here, the original director (Bryan Bertino) steps back into a co-writing role (with Ben Ketai) and passes the reins to '47-Metres Down' director Johannes Roberts. Roberts directs nicely and shows some flair for angles and framing, but sadly he's once again working with sub-par scripting. Bertino and Ketai's script starts promisingly; a family is traveling cross-country to pack their rebellious daughter off to boarding school , and stops off en-route to see their Uncle and Aunt. Uncle Marv lives in a holiday Trailer park which mostly empties out in September, leaving it pretty isolated.

It's a good set-up. And that's pretty much where the script throws in the towel.

Bertino and Ketai make a good effort with some character work between the rebellious daughter and her brother that is better than expected, but the dialogue for most of the movie consists of people yelling "Leave us alone!!!" as if it's some new form of self-defence technique, and there isn't a single line here you haven't heard a hundred times before. The film ditches the building of suspense pretty fast, opting for a great many scenes of people running, jump-scares that make no sense if given 5 seconds of thought, and our family in peril ignoring almost every available weapon, and almost every possible opportunity to use one, in favour of running and screaming.

The behaviour is so staggeringly idiotic that it regularly yanks you completely out of the film in annoyance. Obvious trap after obvious trap is wandered into, even once the characters should know WAY better, and at least 3 times the film is only able to continue because characters who have the upper hand decide to run away or fail to use the lethal weapons readily available to them, making you almost want to cheer on the bad guys, if only to bring a little Darwinism to events.

This is the kind of movie where people running away from a slow-moving vehicle choose to run down the centre of the road, instead of dodging around obstacles. The kind of film where it doesn't matter that the floor of a trailer is three feet off the ground if the writers need it to be at ground level in one scene, and then 3 feet up in the next...yes, it really is that dense.

It's a shame, because there are moments where you see what the film could have been; there's a fun and very nicely shot scene in a pool area lit by gaudy fake palm trees that almost embraces proper thrills. There's a nice scene of menace where one character wordlessly chooses to freak out a trapped victim for a minute or two - but instead of going for genuine terror and unnerving the audience, it's squandered almost instantly and the end to the scene feels cheap and throwaway.

Almost every trope and cliche you can think of gets trotted out, and frankly it's a disservice to the tension and nuance of the first movie.

If you're looking for a cheap disposable slasher, to watch with friends, this will do fine. You won't need to make any effort to stay quiet for the atmosphere or to focus on the plot, because frankly a lack of attention to detail might actually make it better.

Death by Music from the Eighties - The Strangers: Prey at Night review by NP

“What else would you expect from this family?” mom asks dad, having embraced the fact that her husband and children are dreadful. “This is more than just stupid sh*t,” she later tells her daughter.

The parents make nervous small-talk as they wait to see whether their new temporary trailer accommodation meets with their teens’ approval. Not to worry, they’re busy looking at their phones, not speaking, barely tolerating anything. Daughter Kinsey has her Ramones t-shirt on, so clearly she’s not to be provoked. Despite the initial difficulty to warm to the characters, who are only roused from their blandness by arguments, they become more sympathetic as their situation grows more deadly. Why not make them likeable in the first place – then we can care even more about them when things get nasty?

I might be unusual in that I am not familiar with the earlier two ‘Strangers’ films. I think this stands up pretty well on its own, although I’m guessing no explanation is ever given as to who these beings are? Is ‘why not?’ really justification for all the implausibly elaborate ways of torture and killing committed by the creatures when asked ‘Why are you doing this to us?’ Where did they come from? We get no answers here, and are left to wonder why these three antagonists go to such trouble to make life miserable for the family.

Another title for this could have been ‘Death by Music from the Eighties’, because many acts of violence are accompanied by a popular song from that era. Kim Wilde, in particular.

I found this to be a decent, if unremarkable, slasher film. It was also curiously gore free, but as it seems to have done well at the box office, the choice to appeal to the widest of demographics appears to have paid off.

Everyone puts in sterling performances here, from the young and pretty parents, to the older-than-their years teens. My score is 6 out of 10.

Terrible - The Strangers: Prey at Night review by RD

Maybe it's me, but just how pathetic can you be?

The victims' main source of defence against the knife-weilding maniacs is to shout "Stop doing this to us!". Because that's bound to work.

Other than that, it seems they just bypass opportunities to fight back, instead simply letting the stabbings commence.

2008’s The Strangers was a simple and effective little slasher picture which solidly staged all the familiar elements with an earnest drive. The masked killers, the tense atmosphere, the surprises in the scares; it’s all there and it worked rather well for what it was. Now we return once more with The Strangers: Prey at Night and with a budget as slashed as its victims, there’s an itch that feels unscratched in this sequel. All the kills and nitty-gritty of silent stabbers is still there, but now there’s a clawing to harp on that 1980s nostalgia train that has gone running away on fire. Prey at Night can hardly hang on to the caboose.

I must admit though that I do appreciate the almost quaint setup for such a film. A family of four is taking a trip to an aunt and uncle at a trailer park. The visiting folks include the snippy mother (Christina Hendricks), a playful father (Martin Henderson), an aggravated teenage daughter (Bailee Madison), and a fairly average teenage son (Lewis Pullman). They’re not quite connecting but they’ll have to bond fast when they arrive in the darkly lit trailer park to discover that their aunt and uncle have been brutally murdered. It isn’t long before the masked killers of Pin-Up Girl, Dollface, and the less detailed Man in the Mask start attacking and the family is off to the races for the cat and mouse game of killer versus victim.

The tension is still there even if the creepy atmosphere feels a little bit forced at times. The killers remain silent when hiding behind their masks, never revealing anything more than the sharp weapons they choose to gut other people with. This creates a lot of allure and fear when the murderers are right behind their victims, taking a few moments of silent contemplation in admiring the mundane before finishing off their targets. It’s intense and creates a lot of surprises where a lesser film might have resorted to a twist or jumpscare to seem grander. Director Johannes Roberts has the guts to spill the guts when a killer corners his victim and takes the time to take it slow. There’s enough time for someone to burst in from behind to save the day but this isn’t that kind of slasher movie.

But as the film reaches the third act chases of the killers that take a lot of pounding to kill, it becomes desperate to hit that 1980s vibe. Rather than naturally reach that nostalgic twinge, the film struggles to crowbar in that throwback appeal almost as though it was entirely inserted within post-production. It almost seems as though all of it was tossed in during the pool scene, where Lewis Pullman stumbles into a public pool that activates neon lights and a 1980s soundtrack. And, of course, the soundtrack will continue as the Man in the Mask starts swiping at him with an ax in hand. I’m just not feeling it. Another scene feels more forced when the same masked killer corners a victim in the car and takes a moment to tune the radio to an 80s song before delivering the final blow. Maybe those old tunes are what fuel their bloodlust.

If only this Strangers sequel had the perspective to steer this bloody ship into its own style rather than sliding painfully into the 80s scene, it could have been a great return for the 10th anniversary of the little horror film that could. It instead tries to slap on a coat of neon and settle in some synth for an atmosphere that comes off more uninspired than its predecessor. There’s some merit in this film that certainly makes it a step up from the usual horror affair, but when it comes to establishing its own tone, it could use a heftier dose of originality considering the 1980s nostalgia train is derailing quick.