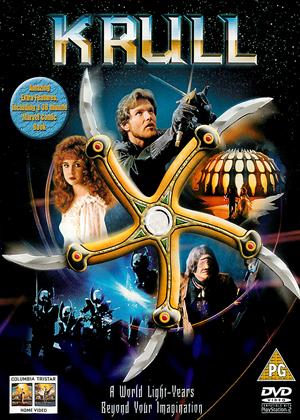 A long time ago, in a galaxy far, far away - no, not that one... - Krull review by Count Otto Black

Oh dear, where do I start? This movie wants so badly to be "Star Wars" that it even begins with a shot of an impossibly enormous spaceship thundering across the void. Except that this spaceship is, as the pompously ham-fisted narration makes clear, a magic flying mountain, so it looks as though we're in "Lord of the Rings" territory too. Oh, and by the way, it's also painfully obvious that it's a poorly animated lump of carved polystyrene.

You know how cheap everything is going to be throughout when a handful of men ride up to a castle that must have had everyone in the audience who had seen "Monty Python and the Holy Grail" shouting "It's only a model!" and announce that the other 300 warriors who were supposed to accompany them got killed on the way. And so it goes. A very eighties-looking princess with hair bigger than her face is about to marry the hero, who, naturally, is a prince, when the wedding is crashed by baddies who had the sense to bring guns to a swordfight. All is lost!

Or is it? Predictable shenanigans follow. The Beast, a sort of extraterrestrial antichrist whose starship tries to rip off H. R. Geiger's designs for "Alien" combined with Salvador Dalí's sets for the dream sequences in Hitchcock's "Spellbound" on about a tenth of the budget of either, wants to marry the big-haired princess because there's a prophecy that she and her lawful wedded hubby will be the parents of the king of the galaxy (so this is maybe a prequel to "He-Man and the Masters of the Universe"?). The hero, who is of course the only wedding guest to miraculously survive being shot, must rescue her with the help of The Glaive (a magic jaggy frisbee which featured much more heavily in the advertising than it does in the film, presumably because animating it was expensive), a sarcastic elderly mentor who will obviously die at some point just like Alec Guinness did in "Star Wars", and the usual band of ragtag semi-reluctant followers, most of whom serve no purpose other than to be killed. There's even a half-assed version of The Force to save the day with when all else fails.

Unfortunately, the whole thing's so flat and lackluster that it doesn't come close to rivaling the so-bad-it's-good high-camp idiocies of the likes of "Star Crash", and you end up simply not caring what happens to anybody. In the course of this damp squib, you'll see not-yet-famous actors like Liam Neeson and Robbie Coltrane wasted in nothing parts, Todd Carty desperately but unsuccessfully trying to break out of being forever typecast as Tucker Jenkins in "Grange Hill" (remember him?), "Carry On" regular Bernard Bresslaw unrecognizable behind terrible animatronic Cyclops makeup, and some bloke as the please-kill-him Dreaded Comic Relief who looks and sounds exactly like Alan Partridge trying to play Gandalf. Oh, and somebody plays the hero. Full marks for doing its best on a limited budget, but in the end it's all a bit of a yawn.