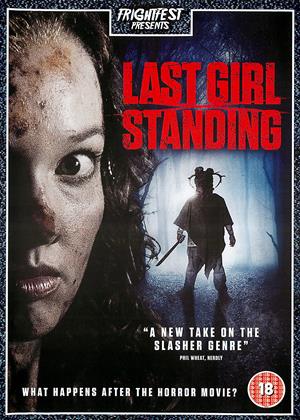 There’s something faintly disorientating about seeing the ‘end’ of a horror film at the beginning: already traumatised teens are dying/have died in a series of gorily extravagant ways by what appears to be a killer in a mask before he too is despatched in a moment that might have been more effective if we’d had substantial running time leading up to that point. Although incongruous, such scenes are necessary for this exploration of what happens after the horror is over for the last girl standing – in this case, Camryn (Akasha Villalobos).

The notion of someone trying to rebuild their life after a horrific sequence is usually featured in the first sequel to any slasher film, but here the adjustment provides the thrust of the story. Having awkwardness and insecurities heaped upon her could make for tedious, patience-stretching viewing, but Camryn’s subsequent trials prove to be full of sufficient incident to remain interesting. Writing, acting and direction are all very much to be praised for this.

The group’s murder, which made the newspaper headlines (according to the clippings Camryn keeps) would, you’d think, have led to the sole survivor being under some sort of ongoing after-care. Therapy or medical monitoring don’t seem to be part of Camryn’s life. When she meets friendly co-worker Nick (Brian Villalobos), she is very much isolated and on her own. But when Nick’s friends become her friends, she is saved from self-pity by the revelation that one of the group, Danielle (Danielle Evon Ploeger) has also suffered her own personal traumas – and it is she who convinces Camryn to revisit the site of her friends’ killings, as a form of closure.

There’s a tragic inevitability about the final twist. In horror, there is no closure, and while the climactic events are not a massive surprise, they are all the more effective because of the truly persuasive warmth and closeness of the characters. ‘The Last Girl Standing’ becomes more of a slasher film in its own right rather than an exploration of what happens after one, and there’s nothing wrong with that. Part financed by the ‘Kickstarter’ scheme, this is a very impressive debut for Director/Writer Benjamin R Moody.