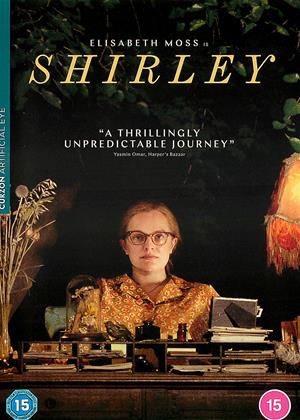 This one starts really well, with Rose Nemser (Odessa Young), reading Shirley Jackson's great story, 'The Lottery' on a train, before, strangely aroused by it, dragging her husband, Fred (Logan Lerman), into the lavatory for sex. The two of them, as it happens, are on their way to Bennington, Vt., where Jackson (Elisabeth Moss) lives with her husband, the literary critic and campus lech Stanley Edgar Hyman (Michael Stuhlbarg). It’s supposed to be a temporary arrangement, but the young couple, like characters in a dark fairy tale, find themselves trapped in a spooky, ivy-covered house full of both menace and enchantment, and we, like them, are taken on a journey of psychological horror and erotic implication.

Adapted by Sarah Gubbins from Susan Scarf Merrell’s novel, it's not (thankfully) a 'biopic'. Decker and Moss instead approach Jackson as if she were a character in her own fiction, which is to say as an object of pity, terror, fascination and awe rather than straightforward sympathy. As she works feverishly on her next novel, she casts a spell on Rose, bedeviling her waking hours with tantrums and haunting her dreams. “I’m a witch,” Shirley proclaims, and it doesn’t seem like metaphor or hyperbole. She guesses the secret of Rose’s pregnancy by looking at her face. Rose, trembling between fear and lust, becomes Shirley’s nursemaid and her muse, her secret sharer and her prey.

Decker and the cinematographer, Sturla Brandth Grovlen, blur the boundaries of realism, interweaving domestic drama with scenes of fantasy, so that by the end we are not sure whose hallucination, or what kind of experience, we are witnessing, and at times the academic power games Shirley and Stanley play with Rose and Fred evoke Albee’s “Who’s Afraid of Virginia Woolf.” The film is also successful with its suggestion of the link between creativity and mental disorder: Shirley is a demonic genius, her brilliance hard to separate from her instability and eccentricity.

One notable liberty that “Shirley” takes with the biographical record is to make Jackson and Hyman childless. In real life, they raised four children, and some of Jackson’s most popular writing consisted of articles and stories about parenthood and everyday domesticity. In removing this thread, and making the unliterary, uneducated Rose (who dropped out of college to marry Fred) an emblem of fertility, the filmmakers impose a stark separation of roles on Jackson that she herself defied, and this seriously undermines the character's complexity.

The ending is all a bit tired and feeble after all the build up, but we are left with more than a suggestion that both Rose and Shirley are victims of a hypocritical, repressive, male-dominated world, though the actual men in their lives are weak, preening mediocrities, whilst the libidinal current that runs between the women, is convincing. Hopefully a lot more to come from a talented director.

A worthy tale, I feel sure - - Shirley review by AS

Whilst I haven’t yet any of this author’s works I now feel interested - but would have liked to be pointed in that direction by a work less stylised. It’s all very self-indulgent indeed, which is a shame, as there are very talented characters involved in this project. Stuck it out until the end, but shouldn’t have really.

An update on the Burton Taylor relationship, or the seedy philandering college professor story where the women have some agency and make use of their situation and form a friendship instead of enmity. Not apparently very biographically accurate about Shirley Jackson, but a literary interpretation that was very satisfactory and beautifully and atmospherically filmed.

A slightly odd film, but a decent story and plot twist - Shirley review by giantrolo

We love Elizabeth Moss so had to rent this film! An excellent performance as ever from her, and from her on-screen husband. It was an odd film in a way, in that it wasn't always clear who was who, but that was sort of explained at the end when the plot twist was revealed. A very interesting factoid was that this film dramatised a real-life horror writer, Shirley Jackson, which we didn't realise from the start. Loved that the character of Rose Nemser was actually reading one of Shirley Jackson's actual books, The Lottery, on the train! That was a really nice homage. Overall, not a bad film, but I'm not sure I'd recommend it.

Queen of the Golden Age of TV, Elizabeth Moss, plays US writer Shirley Jackson (a master of the macabre) in this reimagining of a period in her life, whilst she was working on the novel 'Hangsaman'.

Instead of being a standard biopic, the movie imagines what Jackson's life might have been like if it followed the style of her books. Filmmaker Josephine Decker focuses on Jackson's themes of social anxiety and awkwardness, agoraphobia and love of the macabre that feature in Jackson's most famous fiction (The Haunting of Hill House, We Have Always Lived in the Castle). She cherry picks aspects of Jackson's biography such as her fluctuating mental health, her famously cheating husband (an eubuilient and handsy Michael Stuhlbarg) and then strips out others such as removing her children, which does feel a little odd and a bit of a cheat. But Decker finds her perfect foil in Elizabeth Moss's Jackson in a magnetic, really committed, febrile performance. Her relationship with her house guest Rose (Odessa Young) is intense and perhaps erotic.

After Madeline's Madeline, this is another fine film from Josephine Decker about a character who wears her nerves on the outside. Although some of the adaptations from Jackson's biography rankle a little, it's tonally and technically memorable and accomplished.

Melodrama that loses its convictions - Shirley review by GI

A rather bleak and maudlin melodrama and a fictionalised story about real life horror writer Shirley Jackson played here by Elisabeth Moss. It's not a biopic but really a story about emotional control, abuse and selfishness. Jackson is a cantankerous and anti social author stuck in writer's block and constantly sparring with her shallow and philandering husband played by Michael Stuhlbarg. They take in a young couple Rose (Odessa Young) and Fred (Logan Lerman) who see the older pair as an exciting and interesting pair of mentors. In reality Shirley and her husband use them for their own ends in cruel emotional put downs. Whilst the performances are sincere the narrative here lacks its own convictions. It sets itself up as a film about empowerment with some real menace but sort of feebly jogs along to no real confrontation or conclusion. Ultimately the film fizzles out and lacks any real gumption.